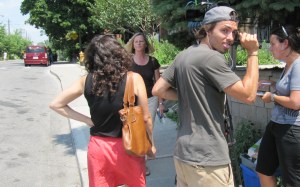 “The Agents” in Action

The tv show, The Agents,  that I’m on is still in production and they are taking their filming out of the East Hoods and into the West End.  Yesterday I was called to go visit a house on Osler (Dupont and Dundas St. West).  I sold a really sweet house on Osler a couple of years ago for a quarter pounder (that’s real estate shop talk for $250,00o) but the one I was going to see was a couple of blocks south.  As I recalled back then, the street was described as blue collar working class and it was in an up and coming neighbourhood called “The Junction.”  Toronto is becoming so neighbourhood obsessed.  Some neighbourhoods have neighbourhoods within their neighbourhood.  They do the gentrification thing and put up a row of upscale townhomes and change the neighbourhood name to something cryptic to disassociate themselves from the original:  “Corktown”, you are still in Regent Park, don’t kid yourself, the meth lab is in full view across the street and the crack hos are using your bodega to get their sundries.  Anyway, over the last two years, it turns out the citizens of The Junction have rejected Osler as part of their hood.  “Oh, no, this isn’t the Junction, ” the listing agent said, “The Junction is part of High Park and they are part of a triangle.”  He waves his hand to the West.  “Then where are we?”  I am horrified.   I need the definition.  The whole reason neighbourhoods have names is so that real estate agents know how to price a house.  Here is the view: 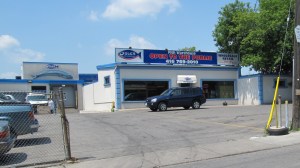 It turns out the Listing Agent didn’t know what neighbourhood we were in.  And as an aside, he was serving  home made gazpacho (agents like to serve lunch on tv).  Cold soup. “Tarragon and tomatoes go so well together,”  he said with confidence.  Eating cold soup is like eating a bowl of relish.  I am out of sorts, I think I need to put this stuff on a hot dog.  He also says, “It’s a buyers’ market so I’m holding on offers til Wednesday.  I think $399,000 is a good price!”  For a house that is not considered part of the Junction?  Maybe if it was in the Junction proper! And, isn’t the defintion of “junction” to join by traffic or railroad?  The railway is a half a block away and there is so much traffic, my interview gets halted so many times that my bowl of gazpacho gets warm in the sun.  And if it is a buyer’s market, isn’t holding back offers a seller’s market strategy? There are so many trucks roaring by, I can barely think straight.  Osler Fish Market is busy for a Monday, and I thought Tuesday was fish day.  Being in the west end had me all confused, everything is so ass backwards.  Usually I am nice in my interviews, but yesterday I was  The Wicked Witch of The East; “This house is never going to sell!”  I cackled. Anyway, if this part of Osler is not considered the Junction, I`m offically calling it Gazpacho Town because I left a trail of it for three blocks.