Pretty much my entire childhood was spent  looking for that elusive Marco Polo.  Where I grew up, we had our own pool in the backyard.  We had lots of neighbours over so it was almost like a public pool, God knows what was in it.  One of my friends confessed years later that she would pee on the edge of it, what can you do?  I’d go and swim in her toilet but that would be just petty revenge.  Now as an adult, I’m pool-less and have to rely on actual public swimming facilities.  As you know, they are all over the city, click here to find one close to you, if you dare.  The one near me is the Donald Somerville at the foot of Woodbine.  It’s quite crowded and the thing I hate is walking up the stairs barefoot.  It’s slippery with sunscreen residue and mud, prime breeding ground for the plantar warts, ugh, let’s not even go there.  I don’t mind going to the Greenwood pool late in the day because it’s less busy and there is just a short tiptoe trot to the concrete.  They don’t like you to wear shoes at the city pools.  In fact there are so many rules that I think Marco Polo himself got fed up.  I have to say I do love to people watch and there is always something entertaining to see:  teenage couples making out, a bearded lady or two, fat men with prison yard tattoos.  The whole Diane Arbus-ness is probably better for the CNE and less appetizing for sharing water.  A few years ago, when the kids were young uns and there was a city strike (no garbage pick up or pools), someone told me about a pool at the Docks.  You pay a small fee to get in but you have lounge chairs and access to a snackbar and a real bar.  At the time it was *the* place to go for the ladies who worked in the evenings, waitresses and whatnot.  They would frolick in the pool in their thong bikinis on blow up floats (you couldn’t do that in a city-run pool) and natter away in their Slavic languages.  A Toronto Sun photographer would always be on hand snapping pictures.  It was just like South Beach.  Such fun and little Freddy learned how to swim that year.  Now the Docks is no longer and it is called Polson Pier.  The pool is still there (the ladies are not, they must be in Hollywood now, famous and happy ever after).  The facility is actually much nicer with comfy couches and umbrellas: 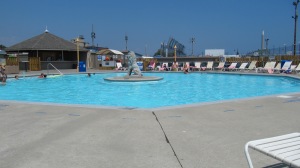 The pool is pretty quiet during the week, $10 for adults and $6 for children (which is undefined, “if you say she is a child, then she is a child” said the man behind the counter about my 16 year old.)  And the pool is so warm and so clear, I actually found two loonies on the bottom which in a Seinfeld moment later lost down the grate in front of the snackbar.  This year Oh Boy Burger has taken over the spot and the burgers and fries are delish, and the pizza is really good too.  The entertaining part of hanging out at the Polson Pier pool is that the venue hosts corporate events and grown-up adults are always doing goofy things (Sumo wrestling) to promote ***team spirit***(eye roll):

I mean, what is this?  It’s blazing hot out there.  Thankfully, they didn’t come into the pool.  Go Marco!

Like Loading...
Posted by Kristin Peterson. Categories: Do This Not That, Hanging Around. Tags: Diane Arbus, Oh Boy Burger, Polson Pier Pool. 2 Comments

Together again, in Heaven, these two #budweiser ❤️