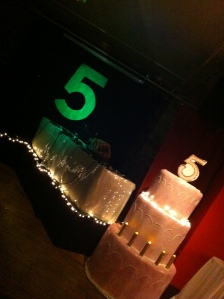 On Friday, the Gladstone Hotel had a big party to celebrate its 5 years of being so hip it hurts.  It’s the oldest hotel in Toronto, built in 1889, and named after Prime Minister William Gladstone (who knew?).  5 years ago, it transformed into an art hotel, “a social and cultural incubator for art, culture, community, and cuisine.”  It’s also in the west end, where hipsters tend to run rampant, waving their freak flags ironically.  Most westerners don’t know anything about Toronto’s east habitat so when you meet one, you can make stuff up like we still have Pop Shoppes in our strip malls.  Anyway my friend Diana at Flohaus invited me to this gala and I gleefully went because it sounded like fun and!  free booze.  I know what you’re thinking if you’ve been reading this blog this month, isn’t she on a Hooch-free January?  Yes, but there is a loop-hole the austerity rule and that is free booze doesn’t count as booze, it is a gift and it is rude not to accept it.  So what fun we had.  There was music, women dressed as drag queens performing burlesque….meaning I thought they were men dressed as women but they weren’t, they were actual ladies, very confusing until out came the pasties, then again they could have been mighty moobs.  The highlight was the hotel had some of their rooms open for viewing.  Each of the 37 guest rooms are decorated in themes by local artists.  Check the website here for details.  I had a few favourites, one room was a 1970s teen dream with collages of the Tiger Beat regulars like Rob Lowe, Rick Springfield, Kristy MacNichol.  I should not have mixed the red and the white together (literally) because my pictures turned out badly but oh well, it was really fun!

Shower in the Blue Line Room 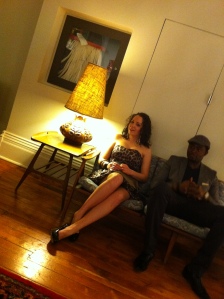