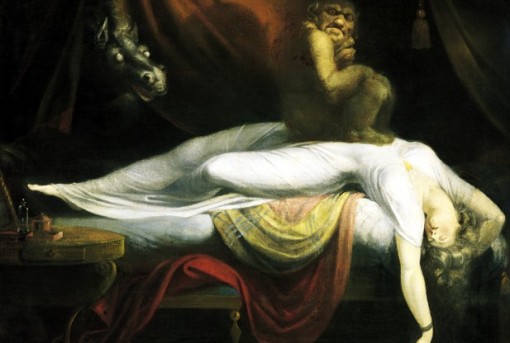 A few days ago, I had one of those “lucid dreams” that I’ve had regularly since I was four years old.  You know those ones you have where you are not quite awake and you are dreaming but you are aware you are dreaming, and you want to move but you can’t move a muscle and you swear that there is a someone in the room and he is going to come and sit on your chest and suck all the oxygen out of your lungs and you want to scream but you can’t because you are in a state of sleep paralysis?  I can’t be the only one who has these because Wikipedia tells me it’s normal (ish).  They call it “Old Hag Syndrome” because in some cultures, it is an old hag (always a woman!)  that is sitting on your chest blowing evil spirits into your soul.  Yes, that seems legit, some ghost bitch wants to go to all the bother of riding my grill.  Lil ol’ me, I have no power anywhere in which to wield any kind of malevolence, my credit cards don’t even work.  What a waste of nefarious ectoplasm.  You would think if an evil spirit wanted to spread around its diabolical agenda, he or she would do it more efficiently, like squatting in the water filtration plants of majors cities.  They could form an Occupy Movement for disgruntled ghosts and spread the word through the pipes so that in the morning, we all get an extra jolt of bitchiness in our cup of joe.  Maybe that explains morning rush hour road rage.

Most of the time, I think my “old hag” is a raccoon that casually waddled into my bedroom from that ridiculous window that swings open on its own even when there is a tiniest breeze.  So far its all been my imagination but I have duct taped the window shut just in case.  The other night, the thing was bigger than a raccoon.  It was man-sized and super clingy.  I couldn’t tell if I was scared or excited.

“Maybe you were visited by Jesus,” my Facebook friend suggested.  He the one that lives in Australia and was instant messaging when I finally fully woke up at 3:40 and was able to turn on the lights to find solace on the interwebs.

“No, it wasn’t Jesus, I would have felt a prickly beard and smelled B.O.   This thing was smooth and hairless…maybe it was AN ALIEN!”

“Well that’s enough internet for me, gotta go now, bye,” and he logged off.

I was fully awake so I checked my email.  Every once in a while one of you kind readers of this blog will send me a private message because writing a comment is such hassle.  You have to decipher wobbly writing of some gibberish and then say something that’s not embarrassing or make up a clever user name because it is out in the internet and somehow your mother might read it.  One of my favourite e-mail pen pals is George who lives somewhere near Bay City, Michigan, at “the base of the thumb” whatever that means.  He first wrote me a couple of months ago saying that he found my blog serendipitously by googling “hand bra” and he ended up laughing instead of fapping (no such thing as “too much information” in my world)  and he has been reading all the posts ever since.  I love him so.

The night of my lucid dream, he wrote:

I  can’t sleep!  Sometimes I wish you lived under my bed and I could take you out and play with you whenever I wanted.  I don’t mean to sound creepy.  I just mean we could have a few beers and play Scrabble while we watch tv.

Not creepy at all, George, just mind blowing.  Maybe we are all living under each others’ beds waiting to come out and play. In the night, our sleeping spirits become interlopers moving fluidly through U.S./Canada border.  The internet is like public transit for ghosts.  George is my “old hag” but he doesn’t want ill-will, he just wants to hang!  That is so cute!  I’m not afraid to go back to sleep now…sweet dreams, George, let’s spoon!

And this has nothing to do with anything except when I think about ghosts, I think about Jack White and here he is in my video of the week, beating up Gary Oldman: