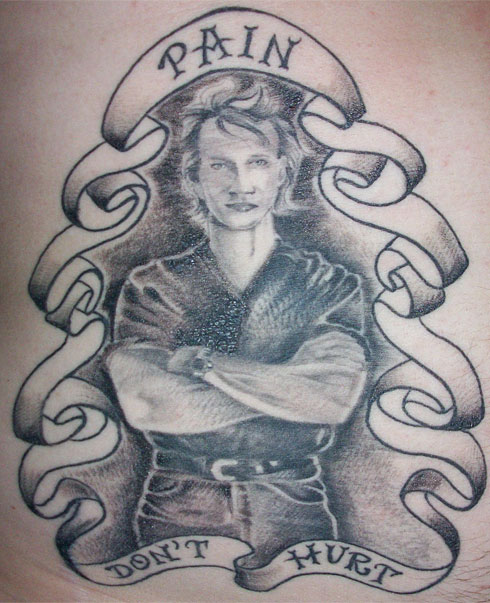 I have plantar fasciitis which when you tell some people, they back away because it sounds ugly and contagious.  It’s just inflammation of the connective tissues on the sole of the foot. It’s a common ailment amongst runners and fat people which is hilariously poetic because in order to treat it, you either have to stop running or lose weight.  Runners gotta run and eaters gotta eat so plantar fasciitis better heal itself or else you might have to go out and buy $800 orthotics.

My condition came about last month walking the lumpy roads of Rome in flip-flops for over a week and when I got home, I could walk no more.  Now when I get out of bed, a searing pain shoots up my heel and I’d have to tip-toe to the toilet.  I’ve had this before after I pronated my way through a marathon 14 years ago and I know how long it takes to heal…months!  And as they in Game of Thrones, winter is coming.  I’m going to have to wear real shoes soon.  I have ignore it, just shoot me if you see me wearing Uggs this year.

“Mother, you need to go to a doctor!” says my daughter as I hobble around the house.

“No!  Doctors don’t fix anything!  They shuffle you around to “specialists” and you will always end up getting a parking ticket just to find out all you need is an ice pack!”

“Ugh, I can’t be bothered.”  The Internet says to roll a ball or a bottle under the sole the foot to massage it.  There are half a dozen tennis balls under any given piece of furniture in my house and yet I also can’t be bothered to do that.

What doesn’t kill me only makes me stoic.  Am I a self-imposed martyr?

When I was a teenager and in my early twenties, for some reason I would only get my period once a year in the summer time. When I did get it, it would last two weeks and I would be double over in pain, like there was a burning ball of fire somewhere in my reproductive system. And let’s not even talk about the gushing flow because I know how you hate gruesome bodily fluids.  No doctor could figure it out.  Finally when I was 21, one genius medical practitioner came up with an obvious solution.

“Go on birth control pills, it will fun,” they said.  It would regulate my cycle and I would become a real woman instead of a vessel for some Satanic spawn.  I lasted three months and I became a monster, as though all the estrogen I had been lacking came on at once and you certainly wouldn’t have wanted to be there when it did.

Anyway, flash further back to the summer when I was 18 and working at my dad’s company in an office full of menfolk, I got my annual period in the morning.  I ended up stuck in the washroom, doubled over with horrific cramps. My dad had to drive me home.  He thought I was faking it or being a total wimp or something. “This is not normal,” he kept saying, “You don’t go home for something like this.” No this is just really embarrassing, so I ignored the cramps the next day and sucked back the Midol. My dad fought in World War 2 for God sake.

Pain:  Deal with it.

Even though I had a wacky menstrual schedule that no doctor could explain, I was able to conceive much to everyone’s shock and my horror. Of course now that I am old and my eggs are rotten, my uterine lining sheds regularly with every waning moon…hilarious joke, troll ovaries.   Anyway, my  pregnancy went smoothly and my lazy-ass lady parts actually got its act together and created a baby without any glitches.  I did go through the birthing process without any pain management because the roving, moronic intern at St. Michael’s Hospital was an asshole.  Long story short:  He assumed because of the dodgy neighbourhood the hospital in that I was a crack whore and my baby would be born severely underweight and needing methadone. I would have rather experience endless hours of fiery ball-of-hell contractions than have that douchebag in the room.  After I told him to fuck off, he craned his head into the room, “Do you want an epidural?” he asked before my actual doctor arrived to catch the 8 pound butterball that took her sweet time sliding out.  NO EPIDURAL!!!

Pain: Please stop,  I will pay you.

Fast forward 10 years later to 2003, I’m in East General Hospital having my wrist X-rayed.  Two weeks earlier I had fallen off my bike, trying to get on it after having a few tequila shots at a beach party.  I landed on my ass, and used my right hand to break the fall. I heard a loud crack. I hobbled home, bike in tow and I think nothing of it the next day.  I have to learn how to drive standard because I had just leased a Mini Cooper and I am taking my real estate courses and my Phase 2 exam is in 3 weeks.  It hurts my wrist to shift gears and I keep stalling the car, I can’t find the sweet spot and I am a big mess.

“I think I might have broken my wrist,”  I say this out loud in the ladies locker room at my gym.  It’s a week after I fell off my bike.  My wrist is swollen.  And not to mention what happened to my tailbone, I have to hang my ass 6 inches off the back of Spinning bike seat otherwise I feel like I am being sodomized by a bulldozer.

“If you broke your wrist, you would know it,” one woman says.  Another genius….yes, a light goes off when you break a bone and tells you that you need to go to the hospital.  Pro tip: Never listen to advice from a naked bitch with a towel turban on her head.

When things just got worse, I went to the hospital and got an X-ray.

“You know,” said the orthopaedic surgeon to the daft cow,”you could have saved yourself a whole lot of trouble if you had come in right after the accident, we could have set it in a cast then.  Now we have to operate and reset the bone, otherwise you’ll be in for some very painful arthritis in the future.”

And I didn’t even have the guts to say anything about my aching tailbone, that bitch is just going to have to shut up and behave. My wrist injury actually thrills me.  An operation!  How exciting!

After the operation, and then getting the cast off, I started taking Hatha yoga classes and later Bikram yoga to become more mindful about my body and learn how to heal itself.

A couple of years later, I saw Bikram Choudhury speak in one of those hotel convention halls downtown and teach one of his classes.  During Q and A, some woman, maybe it was me, asked him, “How long does it take for the pain to go away?”  He just looked at her like she was a frog on the highway and said, “When you are dead!”  Oh how I laughed, and then cried.

Today I hobbled to the gym.  Since I got back from Italy, I have missed all my favourite classes and come in at a different times so I don’t have to see anyone.  I haul myself in the whirlpool and put my foot on the jets.  It hurts so much!!!! I hate being a baby about this. One guy I knew used to whimper and moan about every canker sore and hang nail he had, like he was going to die any minute.  Once he had a splinter that he let fester in his foot and he hobbled around for a month before he would let someone pull it out for him. Dude, I have gravel still stuck in my elbow from when I scraped the pavement on my bike (again with the bikes!) in grade 8.  Grow some balls, I said to myself.

So I got dressed in my gym gear and made my way to the battlefield where I ran into Douglas, my very favourite gym buddy.  Douglas is a octogenarian who routinely plays two hours of tennis after a spin class.  Every day.

“Where have you been, Freddy?” (that’s my gym moniker).

“Oh, I have plantar fasciitis,” I explain, “I’m taking it easy.”

“I had that twice, on both feet. I got it playing squash.  There’s nothing you can do about it, you just have to keep going,” he says.

“But it hurts!”  There is not enough wool in the world to pull over his eyes.

“Suck it up, Freddy!”  he laughs maniacally and saunters away.  Pro tip:  Always listen to an 80-something year old man who can Zumba in the front of the class without missing a beat. So I carry on.  It is what Patrick Swayze would do.

Pain:  You are my bitch. Tomorrow, we spin!