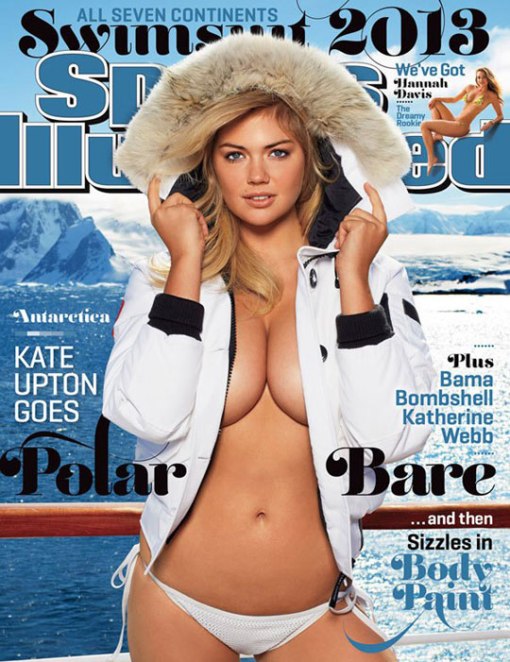 I love Kate Upton. She has big boobs and so do I.  Chicks with big boobs are part a secret sisterhood, we like to stick together and brush each other’s hair and whisper things that only we only know about. Kate is only twenty and she is our reigning poster babe! Ave, Hootervus!  I think of her as a sister but more like my daughter from another ovary because I’m so old now.  Ugh, soon I’m going to have to give up flashing my boobs, it’s so inappropriate.  I can’t help it, I’ve been doing it since eight grade when I answered the door topless for the pizza delivery man on a dare.  I dared myself to do it.  True story.

Last year when the Sport Illustrated Swimsuit edition came out with Kate wearing a 3 triangles the size of a wedge of Laughing Cow cheese, I posted the cover on this very little blog and thanks to StumbleUpon came so much traffic, little blog’s site states on that day looked just like a big, soaring boner.  It’s Kate’s World, we just swim in it.

So anyway, this is her second cover and I’m going to ride with it, click here for more Sports Illustrated (or less, check out how tacky the body paint is).

And I have a lot to say about big boobs.

1. There are Kate Haters among us.  Any time my girl Kate makes the news, be it with her fapworthy Cat Daddy dance or her Mercedes Benz (Meh-cedes) commercial, there is always some little bitch on any given forum:  “Kate Upton is fat!  That’s the only reason she has big boobs!”  Oh my God, she is such a hambeast!  Put her on a diet now or our retinas will burn because she has meaty bits.  Last year at some adult birthday party (insert eye roll, grown up birthday parties are ridiculous), I had a conversation with some married dude about some new cleanse diet he was on (insert another eye roll, people on cleanse diets: STOP, there’s no pork spackle from 5 years ago glued to your colon wall) and you know how middle-aged men are now the new teenage girls?  They have become all body conscious and they think if they get rid of their love handles, we won’t notice their receding hairlines.  And then they get all ripped and start some kind of hair follicle growing operation on their heads and they think we won’t notice the personality disorder.  Talking to Mid-Life Eating Disorder Guy is the worst, because he is also obsessed with the way his wife looks and he shows me some iPhone photos from his vacation where they are on a beach and his wife had just got a fresh boob job: “Look at my abs,” he says,”They’re an 8 pack, I have to cut out all carbs after 5 pm.” And me (more eye rolling) trying to be nice and thinking this would be a compliment:  “Your wife looks great, too, just like Kate Upton in that white bikini.”

AND THEN HE RESPONDS: “Kate Upton?  She’s a cow! Her waist to hip ratio measurements are way too low.  They call her a supermodel but she could never do runway!”  Oh. My. God.  If I had a husband and a sentence like “She could never do runway” came out of his mouth, I would drive that Brokeback to Woody’s on Church Street and set him free, no judgement, and if he came back it like the butterfly that he is, I would assume it would be to steal my stash of Elizabeth Arden Prevage eye cream.

Yesterday I asked my son, Freddy, age 16 and famed boob-man, if he knew who Kate Upton is.

Me:  What about her boobs?

2. Kate is a supermodel but she could never do runway.  Okay, so let’s just address Brokeback’s statement:  I knew you were coming so I made you a gif of a cow lumbering down a runway.  You’re welcome:

3. Sometimes boobs cannot be tamed.  This is true, the good folks at Sports Illustrated are always putting Kate in toddler sized bikinis as if to put greater emphasis on this point.  There is much humour in this that only the secret sisterhood of chicks with big boobs can laugh about.  I can stuff my boobs in a bra and walk around and the earth will still rotate on its axis.  I can put them in a Shock Absorber (that’s a sports bra) and I can run and play tennis without creating a spontaneous sink hole. They are tame on dry land. They will sit and stay on command.  But put them in a swim suit and add water, they become rambunctious Labrador Retriever puppies.  They just want to jump out and run in opposite directions and the more you stuff them back, the crazier they become.  They slither out the bottom, pop out the sides, and explode out out the top.  The best beach vacation I ever had was in Miami where most of the women of all sizes and ages didn’t wear their tops at all.  UNLEASH THE HOUNDS.  The best dog park evarrrrr!

4.  Not all big boobs are enchanting.  Some of them are like heavy bags of marbles and they give a lady back pain.  I get it but mine are not like that, it’s all about density.  The insides of mine are soft and mushy and  feel like ricotta cheese with some soft bits of exploded bubble tea.  I flopped one of mine onto a fish scale last summer and it didn’t even come in as a pound, so when I hear someone who gets an breast reduction say they took 3 pounds off each tit, I am like, yeah, go girl. CANADIAN HEALTH CARE PAYS FOR IT.  Cautionary tale: I know of a woman at my gym who was in the double D range like moi and at 5’10 could carry it AND they were spectacular!  Just like a milk maid from a porno movie!  But she wanted them smaller so she could buy “pretty bras!”  Yes, your tax dollars at work so homegirl can shop in all the drawers at Victoria Secret.  She got them reduced and meh, couldn’t even really tell that much but now her hips look so much bigger :(.

5.  Big boobs get the last laugh.   For some reason, people think they can say anything to you when you have big boobs. “You’re going to sag when you older,” said my friend when we were 18.  She was one of those types of girls who walk around naked all the time like Lena Dunham(!).  And back then I thought, kudos to you for not caring that you have a loose hunks of beef shwarma hanging from your crotch but shut up, “That’s just rude,”  I said. “It’s true,” she said, “You’re going to sag and I’m going to be perky forever,” or something to that effect.  You know I can still get worked up over that bitch. And although I don’t actually know what happened to her, I have seen some post-lacto members of the A-cup sisterhood, and if I’m going to go down, I’m going to take your deflated baby socks with me, ho. And two words: Susan Sarandon.  She is our Grand Poobah.

But really in all earnestness, all boobs are good boobs, take care of the ones you’ve got, sisters, and don’t be afraid of the waves!!  Kate has taught us that. I also made you another flashing gif and yes, while she might be little meaty, she is like a big messy slice of pizza after a night of heavy drinking.  Fuck yeah, Kate Upton, you go girl: