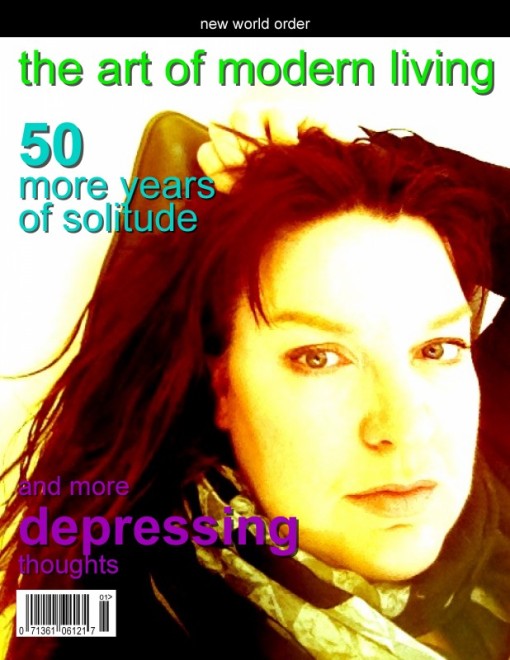 So yeah, my birthday came and went and I didn’t dry up as expected. On the eve of the big day, the gods delivered an exploding magnum of sweet menses nectar that I welcomed with a fist pump: “Yesssss!!! Still full of fossil fuel!” Only to be shot down by my friend, Ask Yahoo: “Your period is like a geyser? That’s a sign of menopause, ho!”  Whatevs.

As you may know, if you are on my tail of tales, I turned 50 on May 11.  I was all freaked and couldn’t even say the number, it came out like “fuh” then graduated to “Fuhfff-tuh” but now I am saying it every where I go like I have Tourettes.  On my actual birthday I began to own the whole ragged mess.

“I’m 50!” I blurted out to no one in particular as I sat in the ladies’ washroom stall at The Only Cafe.

“Fuck yeah,” the feet waiting outside in front of me said, “My mother is 50. She looks fab and she can still ride a bike.”

“That’s awesome! And I can still wipe my own bum!” I said, walking out of the stall.  It turned out that the feet in front of me was one of my daughter’s friends, age 19, who was at the bar to see her play a solo show.

“Oh my God,” she gasped (not really, but it’s my blog) and she really, honestly, truly did say: “You don’t look 50, I thought you were about 35.” What a dear, sweet, stupid girl. I thanked her and gave her a hug, smothering her with my expired mom tits and went back to the bar. It was a good birthday, once I started pronouncing “fifty” properly, my friends and family spoiled me rotten, buying me lunch, dinner, beers, a golden skull, good old money, and my beloved Elizabeth Arden’s PREVAGE, holy cow. But I don’t like to milk a birthday. There’s nothing worse than a grown-ass adult who makes a big production of their birthday like they are the second coming of a newfangled Narcissist Jesus. Hear’s the rule, people: Over the age of 10, NO MORE LASER QUEST FOR YOU!

Anyway, this is just a segue to what I really want to hash out, analyze, make pro con list, confer, deliberate, and bore you to the point where you yell at me: JUST MARRY HIM ALREADY, like I have a choice. As I have blathered on about before, I have a “Remainder Man.”  He is that platonic-ish male friend I have mentioned who parks his trailer in my driveway and buys me beer and wings AND who I have known for many, many, many years, who I may or may not be actually in love with, but let’s discuss. Thankfully he doesn’t read this blog so we can yap about him freely, but I’m going to refer to him as R-Man to protect his identity just in case because he has a wide circle.  This is going to be messy and disjointed so I’m just going to do this in list form and you just follow along or close your eyes and think of England or check out Perez or whatever:

1. R-Man did not call me on my birthday, which is fine, he is a man and birthdays are filed in their brains right behind bullshit and boring chore lists. But he did call me the next day which was Mother’s Day which was by far and away a more thoughtful and sweeter gesture, no? He took me out that afternoon as a Hangover Helper and we drank copious sums of cleansing ale.  He told me about how he was at another dude’s 40th birthday party (I know, right? It’s the men that need all the birthday cuddles). At the party, R-Man was talking it up to all the ladies as that is the R-Man’s modus operandi, he flirts like a fucker on fire, and his girlfriend ended up punching him in the mouth. Of course, that is what a crazy jealous bitch will do and I completely get it, been there and used my acrylic finger nails to swat at some dude’s face once, but you cannot change the stripes of a tiger. Just saying. Also she really needs to go. I hate her with a venomous passion.

2. R-Man’s tiger stripes amuse me. Over the years I have learned his checking out other women is like his Tourettes and sometimes he will mutter “vagina” in public when there is a lull in the conversation. This makes me laugh and laugh because I am actually a 12 year-old boy trapped inside a 50 year-old lady meat costume. But maybe this means we are just like bros and we should go huntin’ and fishin’ and pee standing up together.

3. Whenever R-Man walks into a room, I feel so happy that if I had a tail, it would wag vigorously. Now hold on, is this just platonic like dog love or is it romantic? My heart does NOT do that beat skipping thing which might be over-rated. Now that I am old and know better, is that fluttery feeling just a flight or fight reaction to some sociopath that you really need to stay away from? And if my tail wags, is my pussy far behind? I’m just asking, I don’t know.

4. R-Man is 5 years younger than me but that will even out in old age because he has more afflictions than I do. In reality, if I marry him (shut up!!! just thinking out loud), I will most probably still enjoy a few golden years as a widow, rockin’ the seniors’ home with my bubble gum pink hair and neon green stretch pants, drinking kir royale in the lounge. I’m excited for that.

5. Back to R-Man’s girlfriend just because I think it’s bothering you that he has one and that I am big ho for stealing him away WHICH I HAVEN’T DONE YET. First of all, this is not a Brangelina scandal waiting to happen. No one can “steal” anyone who doesn’t want to quit a bitch. Don’t kid yourself, 99.99% of all couples you see walking around in Canadian Tire purchasing garden hoses are fantasizing about using that thing to somehow escape through the water tank and then run like the wind into the sewer. R-Man and his girlfriend live in separate places, and they break up like it is a casual activity. What are they doing tonight? Oh, just staying in, maybe ordering a pizza, watching Homeland, then breaking up. Or maybe instead of pizza, get takeout from that new Indian place except that butter chicken gives him diarrhea.

6. Lots of things give R-Man diarrhea and while I wouldn’t say he is a picky eater, he is particular. For me, that is somewhat of an all around deal breaker, but we can work it out. He wouldn’t do anything as asinine as going on a “Master Cleanse” but he does obsess about his weight. I swear, I have never had a conversation with him where he doesn’t tell me at some point what he weighs and what he weighed before the current weight. It’s really annoying, I don’t want he wants from me because it’s usually just within a range of four pounds and we have just eaten a pound of wings and washed it down with 3 pints, oh my god, girlfriend, who cares? But everybody has things that exasperate the other person, right? Some things you just need to let go but I swear if he brought a scale into my house, I would smash it down from the roof, just watch.

7. R-Man is the most boisterous person you will ever meet. He will walk into to a bar and yell out HEYYYYYY, everybody in the beach knows him and they are all tickled to see him, he’s got the kind of name you want to shout out. Although I have a special nickname for him that I say in a baby voice, that’s kind of cute right?  He is a classic extrovert but with his moon in hermithood. He has some primitive cabin that he escapes to for his alone me-time which only makes good common sense because otherwise he would just be a buffoon all the time. I like a loud man, but even more I like a loud man who knows when it’s time to shut up. I have noticed that quiet dudes are the controlling, sneaky ones that you need to watch out for. There is never a dull conversation with R-Man but!!! BUT! He has a temper on him. And when you think that age might have mellowed him out, something sets him off, and it’s usually road rage, and then The Fury comes out. Road rage is one of my pet peeves. Why do people get all crazy Jekyll and Hyde when they drive? You wouldn’t yell and honk if you were walking in a mall and had to slow down for a lady with a stroller so why get so enraged when someone in front of them takes their time to make a left turn or merge or whatever. Even if some taxi driver pulls a douche move, just settle down, and guess what?  You’ll get from A to B without having to scream expletives. Calm the fuck down. I like it better when I drive. I guess that’s the solution, just don’t let him drive.

8. R-Man and I took a road trip a few years ago to Sudbury to pick Freddy up from camp.  It was the funnest day ever, there was no road rage at all, just a lot singing along to The Smiths (we love the Smiths!!!) at the top of our lungs and then many stops after drinking Red Bull and urinating in the woods together. We both like to go pee outside even if a proper toilet is available. The first time we bonded was on the same day we met in 1998, we played some random softball game (don’t even ask who what where or why because I have no idea) one afternoon and had some beers, then we both peed in the parking lot in back of my mom van, the Mercury Villager aka The Great White Whale. Maybe we have some kind of primal connection that occurs in the animal kingdom when bodily fluids are excreted and a little bit of oxytocin comes out in the pee-pee, and why wouldn’t it? It’s biology, yo!

This is all the rumination I can handle for now, obsessing about a dude only leads to despair. It’s probably best that he remains Remainder Man as dreams have a knack of just not coming true…sigh…and time is against me now.

In the meantime, let’s just dance, omg, these girls are so funny: