The other day I pulled out of my DVD collection the  movie “Alfie,” the 2004 version with Jude Law and Susan Sarandon.  This is one of my new classic Christmas-time movies but I had just seen, on natural television, the other Susan Sarandon cougar movie, “White Palace” with a young, fresh James Spader as her cub.  I know a lot of women take offense to the term “cougar” but I do not.  A cougar, by my specific definition is a Lady of a Certain Age who seeks the company of a man who she could have given birth to even if  she was in Grade 7.  The basic math is her age minus his age should be equal to or greater than the age of her first visit from Aunt Flo.  Both these movies are kind of tragic but I am inspired by my elder cougar mentors.  They blaze through the mountains, with their high heels and Chanel lipstick, and I follow along, eagerly, in my Birkenstocks, smacking my lips with Cherry Chapstick (STILL!).

Without a doubt, Susan Sarandon is the reigning Cougar Queen of Hollywood.   She is a predator though, and while I admire her, I don’t emulate her.  She is a cougar by design but I am a cougar by default.  I would like to date in my age range, but available men in my demographic don’t want to play in my sand box.  Don’t feel sorry for me because I don’t really care.  If a man is single in his forties, he is usually some other woman’s spent piece and he comes with not just baggage but a garage load of odds and sods resembling broken down farm equipment.  The stuff in his “baggage” is moth-eaten, is mismatched and has skid marks.  This is proverbial talk of course.  Like I care about a skid mark.  With the right man, I would find a skid mark down right charming, a little accent of humanity in an otherwise overbleached, Lysoled world.  People are always trying to cover up their smells.  Anyway, those lost dudes end up cleaning themselves real fine and they buy a fancy car and “move on” seeking the company of a younger ho or being a part of the modern and rapidly more ubiquitous coupling:  White guy, Asian gal. This is not something that needs to be fought.  It’s like math sequencing that you learned in elementary school:  40, 20, 50, 25, 60, 30, 70,35, 80…..can you guess the next number?  It’s 40!  Which means, by the force of nature,  I need to date an octagarian!  Or find a niche market and go with it.  Do you know what turns my head?  A Sikh man in some kind of uniform.  My neighbourhood UPS man is a vision of smoldering brown hotness from turban to toe.  And the cop directing traffic this morning on Woodbine had an OPP turban on that matched his uniform nearly made me crash my car.  That stupid movie, The English Patient, started me on this.  It’s all the mystery of the forbidden fruit of conflicting cultures.  But in realty, they have the same skid marks as your balding husband in his Jockeys underneath his Dockers.  And again, just like my dolty douchebag demographic, I wave at them, but they never wave back.

So I have learned a lady has to go where the bone is.  There is no point in fighting City Hall.  Go with the flow.  As it turns out, the only men that ever paid me any mind in the last 6 years, I could have definitely given birth to and had their little brothers, too.  It borders on creepy, for sure.  Like that dude on a skateboard I met on the street a couple of months ago who liked my Velvet Underground tshirt, he turned out to be in high school.  Don’t judge me, I didn’t start it.   6 years ago, when I separated from my same-age ex-husband and moved into this house, I needed a handyman to assemble some Ikea furniture.  Of course I could have done it myself, but there are two types of people:  those who read instructions and those who won’t.  I am the latter.  So I went outside and I flagged the first person I saw walking on the street.  Serendipity.  He was a university student, age 19, and because it was during a July heatwave, he wasn’t wearing a shirt and he all ripped and ready.  He accepted my offer of fifty bucks to assemble 2 dressers for my bedroom.  I know you’re probably thinking I am making this up and have watched one too many Vivid feature films on Friday night Showcase.  But no, it wasn’t intended like that, he assembled the drawers, I gave him money and a beer, and he gave me his number in case I needed him again, for anything, any time.  I put him in my phone as “Handy Luke” so I would remember what he did.  “Handy” being the operative word.  That summer he came by my house a few times, on his own, and always without a shirt.  We sat on my porch and had beers and who would tell me about his girlfriend, who was also 19.  She was really nice and pretty but she wouldn’t do things that he wanted.  According to him, she was worried about how she looked, so she kept her bra on and wrapped up in a sheet.  The paradox of youth, when you have it, you hide it and then you wish you had it back when you are old but by then it’s too late.  Lucky for me, I was never like that.  I will go naked any where, any time.  It’s my claim to fame.

After the summer of  Handy Luke, he went back to school, out of town, and soon out of mind.  Strangely enough, I thought about him last week when I caught of whiff of someone’s soap in a crowded elevator.  He had a definite odour and when I smelled it from a random stranger, I got a wave nostalgia.  Where is he now?  Has he shagged his way to proper manhood?  He’d be 25 now.  He was really handsome.  Sigh.  Cougar purr.  And then yesterday, when I was waiting in line at the butcher, my phone made that nerve jangling glass-ping sound, alerting me to a text message.  Now you’d think I would be a texting-type person but I am not.  That sound fills me with dread.  I’d sooner communicate by Morse code than a text message, it’s just so passsive aggresive.  Anyway, much to my complete surprise, it was a message from Handy Luke.  Isn’t that weird how that always seems to happen?  You think of someone randomly and then they show up out of the blue.  Anyway, as I’m waiting for my chicken to be chopped up in a million pieces, this is how the exchange went:

HANDY LUKE:  How are you?

ME:  I’m good!  This is so weird, I was just thinking of you the other day, how are you?

HANDY LUKE:  I forget what your boobs look like.

ME:  As if.  They’re still hanging in there.

HANDY LUKE:  Can you shoot me a pic?

And so I hightailed out of the shop with my bag of dismembered chicken parts, a spicy salami, and a new lease on life.  When I got home, I went to my bedroom and and whipped the bra off and assumed position on the bed.  Now I am no stranger to this sort of photography and pretty much by trial and error, I know the right angles and propping to make the boobs seem appetizing.  I snapped a shot from my phone then checked the image.  Oh dear.  The flash had gone off so my rack looked like an all-terrain surreal landscape.  The left boob slipped mostly out of frame except for the squiggly blue vein on the top, it looked like a raging river plunging into a valley of patchy dirt.  THIS IS WHY WE MUST USE SPF99 ON OUR DECOLLETE!  On the base of the second mountain, aka. the right boob, is a giant spider bite that looks like a volcano ready to erupt.  Further on up, another messy waterway of veins and to the top, a jaggedy pink rock that looks could fall over any minute.  That is the nipple with the scar, the one that got bit by a certain 3 year old who shall remain nameless but wanted to try again because her baby brother seemed to like it so much.  I deleted this photo, so don’t you be asking me for it.  Instead I texted him back:

HANDY LUKE:  I’m in the hospital

HANDY LUKE:  My girlfriend just got a boob job!  I’m in the waiting room while they take the bandages off. I wanted to see what real ones looked like 😉

ME:  Just close your eyes and think of two Dairy Queen soft serve cones, melting in the sun.

And there you go.  A cougar tale.  And another happy cub with a fond memory.  I just may sit on the porch and wait for another one to come by.  Yawn. 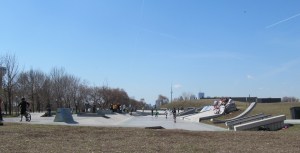 The skate park at Coxwell Ave and Lakeshore Blvd East

I have to say, every time I swing by this park, I smile.  I know what you’re thinking and no, I am not some crazed cougar prowling for prey…By the way, I call myself a LOCA (lady of a certain age), but you know cougar is okay too. Own it, as I always say.  The reason I love this park is for the simple fact that the city of Toronto built it.  You can pass by this place at any time during the day, and you will see kids hanging out on their boards, probably ditching school!  It’s as though the city is encouraging bad behaviour!  And why is this a good thing?  Because as an ex-Montrealer, I am tired of defending Toronto and its puritanical ways. Sometimes it’s embarassing like years ago, the mayor banned the Bare Naked Ladies from playing at city hall because their name is offensive.  I pretend it doesn’t really matter that that the cheese curds in our poutine does not squeak (this is actually heartbreaking for me), but we can turn right on a red light, though!   There are so many rules and  unspoken social mores  here in T.O.  In Montreal, a man can walk into a corner Depanneur wearing a speedo and no one bats an eye…the best part is, he can buy beer! It gets so oppressive here that a LOCA such as myself in order to rebel will purposefully disable a grocery cart at Loblaws by pushing it over the invisible locking line in the parking lot.  The skate part is a symbol of hope, a graffiti’d beacon for slackers.  And here they are…and some of them are wearing helmets, you can’t take the good completely out of Toronto: 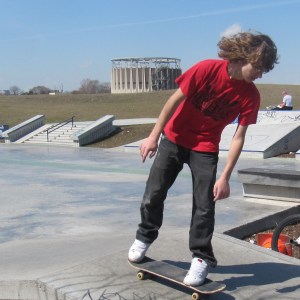 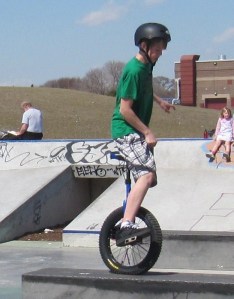