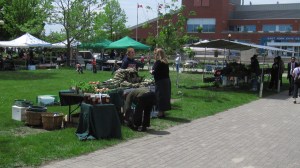 Yay!  Starting today, every Tuesday, the Farmer’s Market comes comes to the East York Civic Centre (on Coxwell Ave at Cosburn).  The East York Civic Centre is one of those handy places to know about where you can get your driver’s license updated and a flu shot.  And now that it is mid-May, the market is there once a week as well.  It’s still kind of early, so if asparagus doesn’t rock your boat, all the vendors aren’t set up yet.  The marble rye/poppy seed loaf people are there (try the honey garlic sausages, yum!).  And speaking of honey, the honey people are there too.  I got a honey skin cream that is supposed to be good for any skin ailment from diaper rash to eczema.  It smells fantastic, I’m putting it on my baggy neck right now, maybe it will look normal again or at least some vampire will want to bite it.  They have loads of flavoured honey.  I got the ginger infused one which is soooo delish and I am having right now in my tea.  You know, Dr. Oz approves of honey, it’s his Number One Pantry Healer.  I’m going to make this sticky honey soy chicken wing recipe, click here to watch the lady make it on you tube.  What did we do before you tube?  So much easier than reading a recipe and getting the pages all stuck together.  The cute boys who run the south side of market are back and they had the super skinny asparagus which I am more partial to than the big fat ones, oddly enough.  Roasted asparagus is a reason to buy that super expensive sea salt that looks like shaved flakes.  I’m going to try drizzling some of that ginger honey on them, bet that will be a taste sensation.  Mmmm, honey….oh, and here’s a recipe for a honey martini that’s supposed to be an aphrodisiac: 1.5 oz of rum, 1 oz honey, lemon squeeze, splash soda water, and serve with a honey stick (the farmer’s market had them!). You know, I would add some mint and call it a honey mojito…in fact, I declare it to be the Summer of Honey!  I’ll be trying out all the flavours, see you next Tuesday!