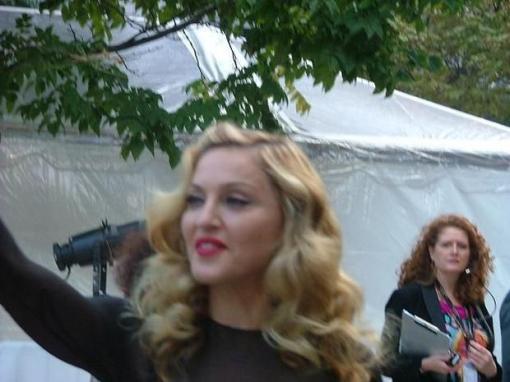 Dear Madonna: A hydrangea by any other name would smell like your spent panty liner. Don’t kid yourself. You simply stink.

It’s TIFF (Toronto International Film Festival) week in my fair city. Nobody loves the hobby of celebrity watching more than me, I won’t lie. They are not so easy to spot as they are shrinky-dink versions of what you think they might be because you normally see them in a confirmed and designated spot where they take up the entire confined space that is your tv set or cinema screen. They are ENORMOUS in there. And luminous. But in real life, they don’t stand out that much. A few years back a friend and I went to Yorkville to “starwatch”, and as soon as we got to prime territory, I spotted one. She wasn’t wearing makeup but she had an “entourage” with her, all of whom were laughing at what appeared her witty rapport. Her wingspan was possibly a half a block wide.

“We just passed Maggie whatshername,” I nudged her as we were walking west along Bloor Street.

“Who?” She whipped her head around.

“Maggie Gyllen-something, she was in that movie where she was a perverted secretary and she has that brother, Jake, with eyes too close together, in that movie with Jennifer Aniston where he killed himself, ugh, I forget the last name…” Bear in mind, I am trying to explain this pre-Brokeback Mountain.

“Yes, it’s her! It’s the Film Festival, we are in front Holt Renfrew, why wouldn’t it be her?” Seriously, it’s not like I told her I saw the Easter Bunny. Maggie Gyllenhaal, as though she appears from vapours on special command by a sorcerer from Planet Prada. Celebrities are not regular folk, let’s just say it right now. Maggie G-Hole`s shit doesn’t stink and I will tell you why: I have learnt to spell her last name since that day. I do not know how to spell my own mother’s maiden name, true story, because there is an “i before e” scenario that I never remember is part of a rule or the exception. Later that day, we both concurred that we did indeed see Nick Nolte and he was drunk. We gave him a toonie for a cup of coffee, he looked like he could use one.

I`ve become less enthralled by this whole TIFF thing as the years go by, only because it’s become so popular. I’m a star-ho but I’m also a snob because I went to film school. It`s all pompous semantics. Movies versus Films. What’s the difference? You “rent” a movie but you “watch” a film. Let’s make a metaphor: The first is a hooker, the second your neighbour’s wife. Movies are disposable, films are coveted. One plays every second weekend on Peachtree, the other you saw only once, one Tuesday afternoon at a film festival, like the TIFF. And you are lucky if you ever come across it again. Never on Netflix, which is run by the Taliban, so you are left with only foggy film memories. I’ve got a whole archive of cinematic favourites stored in my otherwise dimly-lit theatre of grey matter. As a film buff, I have these fan letters:

Dear TIFF: Keep on trucking and keep your eyes on the road. This isn’t Hollywood.

Dear George Clooney: Shave the “beard.” We all know the truth.

Dear Brad Pitt: It’s okay, we all make mistakes. Add some Borax to your bathwater and it will wash off. Just go home. To Oklahoma! Love you!

How perfect is this? #soup #elvis