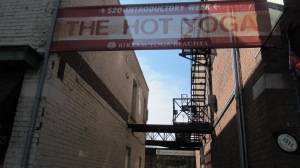 What is all this yoga, yoga, yoga?  It’s everywhere you turn, you can’t throw a dumbbell in a gym without hitting someone sitting cross legged with their eyes closed.  They are the yogis and they are taking over the cityscapes, they walk amongst us, on subways, in coffee shops with their yoga mats rolled up like machine guns.  We scowl at them and they smile back serenely, as though their higher power can control the weather.  They are young and old, rich and poor.  In fact many of them are celebrities.   They love to go on talk shows and have the host fawn over them about how young they look.  It’s not the Botox, Restalyne, or dermabrasion they talk about….it’s yoga!  Here’s the proof:

This is Raquel Welsh: 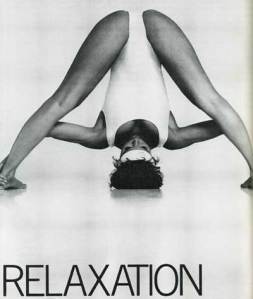 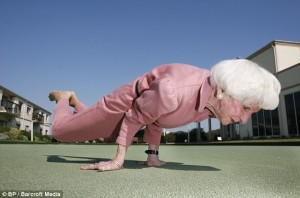 sorry, my bad, this is Madonna:

and even Lindsay Lohan:

Actually, I’m not entirely joking….Lindsay is attempting “Awkward Pose” and she doesn’t even know it.  In fact, most of us do yoga and are unaware of it, when we breathe and stretch.  Yoga is the state of union between two opposites, mind and body.  I stumbled into my yoga practise Lohan-style a few years ago after I broke my wrist and cracked my tail bone trying to get on my bike after some crazy beach party that included tequila shots…..dumb dumb dumb, I know.  But like with all acts of stupidity, a lesson will follow.  It’s as though the gods were watching me and trying to point something out because my accident occurred right smack dab in front of The Beaches Bikram Yoga studio.  For months I would walk by and say to people:  “This is where I broke my wrist!”  Finally, I decided to actually go in the place.  I had taken yoga before (in a church basement with Peakfreans and tea served afterwards)  so I wasn’t a virgin, or so I thought.  When they called it “hot yoga” I assumed they meant “groovy.”  It turned out hot means 106 degrees.  And it also turned out not all yoga is the same.  I later learned there are different kinds of yogas, some examples Ashtanga, Vinyasa, Hatha, and Bikram.  Bikram is a method of yoga created by Bikram Choudhury as a series of 26 postures and practised in a heated room in front of mirrors….yikes!  The yoga practise http://www.bikramyoga.com/ has studios all over the world and it is taught by instructors who have to go to special teacher’s training for two months.   Bikram, who is still around and in his 60s, has some cultivated eccentricities that would rival Joan Crawford’s and her stance against wire hangers.  It is Bikram’s way or the highway and what ever you do, don’t wear anything green.  I had the priviledge of attending one of his seminars when he came to Toronto a couple of years ago and yes, he’s crazy but he’s also really cute and funny.  I respond well to bossy people because I am the youngest of 4, and I learned early on that doing what you’re told is the first phase of detachment which is an important element in practising yoga.  Being forced to curl up in a ball and be my brother’s footstool while he watched The Brady Bunch was my first foray into the discipline. Bikram is 90 minutes and following the dialogue is really all you have to do.  Some of it is counter-intuitive, like no fidgeting when sweat is dripping in your ear and only breathing through your nose when it is blocked. Every time I go, I learn something new and old , and borrowed and blue. In fact, I might marry Bikram.  I have been going 6 years to the Beach studio and I now think of it as an oasis and a sanctuary.  The studio is bright and spacious and the people that run it are fantastic and friendly http://www.bikramyogatoronto.com/ .  If you can do this in the heat, you can probably do almost anything.  It does a lot for your flexibility (a millimeter at a time) but it does do more for the mind than you could imagine.  “It’s so boring,” some people complain.  Conquering boredom is one of my greatest achievements that I learned through yoga.  The litmus test is that when I go into an office waiting room, I don’t automatically lunge for a dog-eared 4 year old copy of Golfer’s Digest.  I can just sit and stare at a point in the wall and think about nothing, which is a good thing because spend an hour in my brain and you’d be trying to sedate yourself.  I encourage anyone and everyone just to try it, $20 unlimited for a week….it’s cheaper than basic cable!  Oh, and now when I walk by the joint, and having long forgotten about my broken wrist, I say : ‘This is where I do my yoga!”  I am yogi, hear me roar.