This is why we love mamas so much….would the man-bird go out and find worms for his chickies?  No, he is probably sitting on some telephone wire puffing out his chest, chirping about nothing to nobody and then he’ll fly away, squirting white poop on your windshield without even giving it a thought.  Well, here’s a thought (and a reminder) tomorrow is Mother’s Day….it’s not Mother-specific as in Yo Mama, it is all Mother’s Day, and it`s not just morning either….the whole day is included, so don’t think you can just toss her a card and some toast at 9 a.m and you’re done.  No, you must honour all mothers, all day long.  Sometimes my birthday falls before or on Mother’s Day, which somehow cancels out this holiday in the minds of my spawn.  One year, it was late afternoon, when one of them pried his eyes off the tv and said, flatly:  “Oh, yeah, Happy Mother’s Day.”  Really, it’s 4 pm, the day is done, it’s too late for happiness but not too early for a cocktail.  This year, B-day is after M-day so I’m expecting the whole bucket of chicken, so to speak.  Mothers love buckets of chicken, by the way, at least this one does….you know which kind, and I don’t want to hear anything about how this particular franchise manages to breed Frankenchickens with 4 breasts and no heads.  Keep your urban myths to yourself and let mama lick her fingers.

Beachwood Flower Shop at 1916 Queen St East, east of Woodbine Ave is the place to go.  They make the bouquets upon specification and they don’t skimp on the superfluous foliage that makes a bunch of flowers go from humdrum to spectacular:

Mothers also like to stay in bed on Sunday morning to watch the back-to-back episodes of “New Adventures of Old Christine” on The W Network.  Feel free to TAKE THE DOG OUT and pick up some croissants at Zane’s bakery (the ones with chocolate inside) and whilst you’re at it, order her a chocolate birthday cake for Tuesday.  Everything at Zane`s (Queen Street East, just east of Brookmount)  is delicious, you really can`t go wrong: 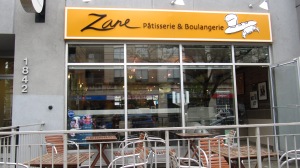 So don`t forget Mother`s Day tomorrow….be nice to all the mamas out there!