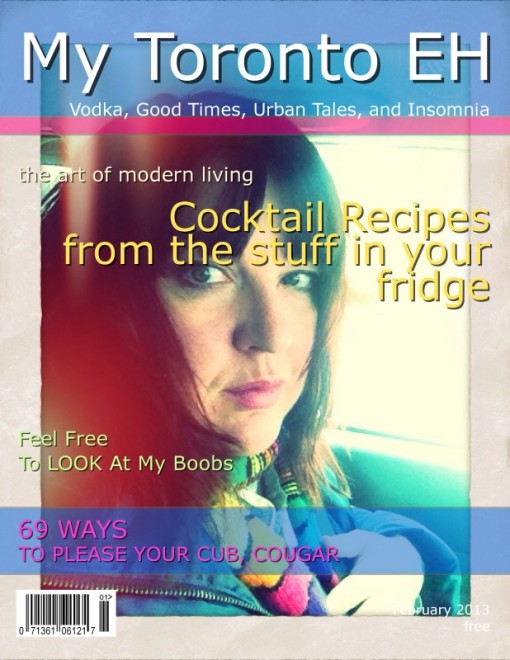 Well, well, well…this has been a bullshit winter.  Weather-wise, IT’S SO COLD! I’ve been wearing the same thing every day for the last two months.  I find when I’m so cold, I don’t even care anymore…about anything, except for you people, my internet lovers.  And fried chicken.

Valentine’s Day came and went! I don’t care at all about romance and stuff but I always cook up something special on Vagina-Lonely-Day because it takes my mind off my harrowing despair otherwise known as celibacy.  This year, I mastered the art of fried chicken!  It’s all about the brine!  Who knew? I made about 6 batches in total, since the Toronto Star published the recipe of The Stockyards, and fuck, it is HARD.  No joke, it takes 2 days to make, at least.  First you have to soak the pieces in brine in the fridge….and do you even know what brine is?  It’s salty, sugar water. Like the tears of a sad clown. NO, I DID NOT GET SAD ON VALENTINE’S DAY!  I’m so over it.

Anyway, after the chicken is done its 48 hour briny bath, you soak it in buttermilk where it luxuriates with some spices for a few hours while you watch something on Netflix. Do NOT do your nails at this point because what comes next is more tactile than you might want to get with raw chicken. But I have nothing else going on so I got my fingers into it. After the buttermilk soak, you coat the chicken with flour.  It is so messy!  But worth it.  I don’t have a deep fryer, I just use a pot of vegetable oil on the stove and dump the pieces in after you have heated it up for longer than you can stand. Hot oil doesn’t really bubble, it just swirls around all impatient-like. This is where I have gone wrong, putting the pieces in before the oil is hot enough, then the coating comes off. But still, it is fried chicken and you almost can never go wrong no matter how you cook it.  Sigh.

Who am I kidding? I am a bitter old cow who needs a brine bath and a buttermilk soak and then dumped in a deep fryer.  I am jealous of chicken.

A couple of weeks ago a friend of mine decided to try on-line dating, I told her about Okcupid because if you follow this blog, I got what I wanted last summer.  She is more interested in dating an age appropriate man so I think when she first logged in, neither of us had any real hope.  But off she went, into the deep, dark woods of the interwebz and what do you know?  She went on a coffee date and had an actual good time.  Then came another date.

She explained that when she sees him, her heart skips a beat.  Is it scary?  Yes, it is scary.  THIS IS CUPID’S ARROW STABBING YOU IN YOUR HEART! It’s an actual thing,  Apparently it is scary because your old, jaded self becomes powerless.  That is so awesome I can’t stand it!  I want that feeling!

I have crushes, minor and fleeting…like the cable man who saved my Peachtree from the digital force crushing out my analog signals, the drama!  It lasted an hour.  I have a kind of crush on a dude I encounter in my daily activities but he is married or something and my heart does not skip a beat when I see him.  My loins get all fired up though, and when I talk to him, I allow the verbal diarrhea to spew out of my mouth which is awesome in its own right, but it is not SMITTEN.  And he probably thinks I’m an idiot.  I realize this heart beat skipping trick has to be MUTUAL in order for it to be scary.

I want to be smitten AND scared.

That’s Lorelei Gilmore, having an impromptu session with a shrink in the back of a car.  But that is also me, I’m tired and impatient and I have been growing my hair out to no avail.

With that querulous attitude, yesterday I put up a new profile on Okcupid.  Why is it that I can write a 1500 word blog post for you people and be my most happy self doing it but I can’t fill out profile form to save my life?  Ugh, I am the worst, but do the men even read these things?  Don’t they just look at pictures?  Some creepy mofo on Facebook accused me of putting up old photos of myself when I just took one on Tuesday and the previous one was from September and he has never even met me in person.  I am only guilty of Hipstomatic filtering, but who isn’t?  If you want to see pores just use your imagination.  They look like moon craters, dude.

So I put my thing up and waited and then like, nothing.  An hour went by…is this thing even on?  Last summer, I hadn’t even finished writing the profile when the locusts came.  That is not bragging, that is just the law of interwebz nature.  This time around people were perusing me in silence, it shows who checked out your profile but no one actually said anything.  What the hell? I put a link to this blog so they could be dazzled by the polka dotted background at least.  Then someone wrote: “Your blog is really funny, you should right as a living.”  I know, right?  WRITE.  And yes,  I know, I know, I am the Queen of Typos but I couldn’t get passed it.

So I took matters in my own hands and went trolling, trolling, trolling.  I cast my net at AGE APPROPRIATE men folk because I don’t think I could ever get this elusive smitten feeling with a cub, no offence twentysomethings but you don’t know who the original Starsky and Hutch are.

So I wrote to two men, they both had really good profiles.  One was a HERMIT!  I am a hermit!  Surely we could hermit together.  I picked out our wedding china as I wrote him this quick hello:  “I like your profile, it’s very clever and witty…”  I sent it, waited…I could see him checking out my profile (this is like making eye contact at a virtual bar)…and then I waited some more and NOTHING.  He did not respond.  I was sure he would be excited by our mutual love of HBO.  But no, it wasn’t enough to hermit with.  Hermits probably need social butterflies in order to not turn into Unabombers, right?  So maybe it’s not meant to be.

The next guy was really stern looking but he rocked a plaid shirt.  He was an “almost vegetarian” and he sold his cars and now rides a bicycle as his main mode of transportation.  I know, slightly disturbing, cyclists are a weird breed but I was a bike courier in my heyday. His long winded profile read like a novella but I could get behind that, it meant he was probably literate and could read my blog and appreciate my ramblings.  So I sent him a hello note.  Watched him check out my profile, again, just like the other dude did and I waited and AGAIN NOTHING!

What the fuck?  Then I realized: fried chicken.  I wrote something about fried chicken on my opening line which probably offended his “almost vegetarian” sensibilities.  Oh well, whatevs…love me, love my fried chicken.

So I deleted my profile this morning.  Seriously, this pheromone rush I seek is best left in the hands of that lazy ass little Cupid boy to get his act together.  I just might have to wait a little longer, or not….maybe I’ll fry up some more chicken EVEN THOUGH IT TAKES SO FUCKING LONG.