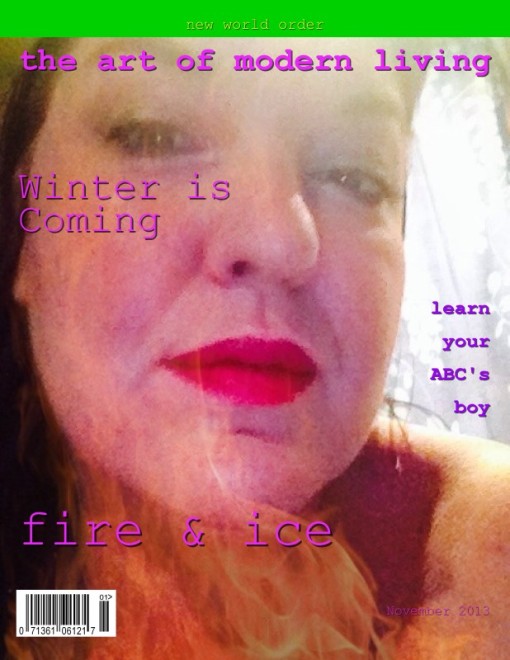 “I’ve got more than enough to eat at home,” he said aaaand all jaws in the world dropped. I don’t even have to tell you the context of this sentence.

For the entire week all I could think is: ROB FORD IS A DEEP SEA DIVER! This makes me love him just a little bit. I’m sorry, don’t hate me, hear me out.

And then of course I had to go and imagine it all in detail and since I barely know what his wife even looks like, I had to be the recipient. Your turn to fantasize with me. THE VISUAL. I’ll wait here a few seconds while you catch up (p.s. he is wearing a white undershirt and blue checkered boxers and socks, especially the socks, so it’s not so much like be devoured by flailing mounds of indiscernible pink manatee flesh). Think of him eating an ice cream cone. It’s better if you imagine him inhaling it in one gulp with his eyes closed rather than licking it slowly and looking up at you all sexy like after each tongue stroke because GROSS.

Sorry to make you go through that, here is some eye bleach to help make it go away:

I know he’s probably even lying even lying about his at-home taco buffet and he hasn’t been near his wife in years because married men are like that. Still he made the proclamation that he “eats pussy.” Rob Ford dines on sushi and that alright by me. Don’t worry, I won’t vote for him in the next election for his box lunch. But A for effort, RoFo.

Occasionally you do come across a dude who has crossed that off the menu and what’s up with that?

I’ve always been crazy attracted to men with beards because I assumed it was their way of subliminally expressing their prowess in the lady licking department. The bigger the beard the more wolf-like their appetite. Even the little douchey caterpillar-type ones under the lip, they are even called pussy dusters by the way, are alright by me.

And then it happened, a mutation of my theory, that one with a post modern Jesus-type goatee told me he doesn’t go ever downtown. LIKE NEVER HAS AND NEVER WILL. His masterful cocksmithery alone was enough, in his not so humble opinion. I was like all mind-blown, he needs to shave off his beard because of false advertising. It even had shards of silver hairs in it like he had some wisdom and would be good at it. But no, not ever, never ever, he said vehemently. What a waste. And by the way dudes out there of the same ilk, don’t expect a lady to get all Pompeii on your ass if you don’t reciprocate. Expect nothing more than a limp starfish, just saying.

I understand not everybody can be a pussy whisperer. I know, I have been lucky enough to have been on the top of Mount Vesuvius that time it exploded lava. THAT ONE TIME, THOUGH. There is much technique to learn but it’s okay to just to do the alphabet, you don’t even have to go to Z, J or K will do, and then move it along. WE JUST WANT TO BE ACKNOWLEDGED IN A WAY WE HAVE GROWN EXPECTED BY WATCHING SO MUCH INTERNET PORN. It’s really not that hard, and I get it, if you hate the taste so bad, pop a lozenge, that is why they call it “Fisherman’s Friend,” son. Oh my god.

In the meantime, my daughter has been having boy problems. We can talk like adults and she reads this blog without cringing, just so you know. She is almost twenty and is in third year U of T studying English and other such topics like human sexuality. She writes soulful, thought-provoking poems that shock my mind how smart they are. She has been encouraging me and I’ve been writing some poetry lately and have a little oeuvre stored in my laptop which she read without asking: “Mama, you should put them in your blog!”  My poems are so very, very embarrassing! Which means I will share one with you that I will leave at the bottom of the post because you know how love expose everything on the internet. But just so you know, I do keep some shit on my vault, I don’t share everything, so keep those emails coming.

Anyway, because of her boy problems which I won’t get into in much detail, we spent the weekend doing girl time. We watched a movie on Netflix called “Nowhere Boy” about the early days of John Lennon. And we both DIED at the actor, Aaron Taylor-Johnson, move the fuck over, RPatzz:

NOTICE THE FACIAL HAIR! Oh, I bet you anything he knows his ABC’s and eats his all fish tacos with relish. He is twenty-three years old AND! Get this: he is married to a 46-year-old, I AM DYING HERE! There is hope, that is all I will say about that.

Back to her and everybody else’s boy problems, though…they are universal, aren’t they? Why don’t they call? Don’t they know it’s the weekend? How come when you get upset, they back away? Why is it they hunt you down and then when they have you, all they do when they are with you is text their buddies and make plans to go elsewhere?

I don’t know the answer to any of these questions. You know I’m not a man-hater even though I have been put through the ringer more than once and enough times to be a bitter old cow, I am not. More menfolk read my blog than women (I think it’s because it’s like the of reading their sister’s diary) and I love you all but why are you all so very stupid? I sometimes think you have evolved from manly, hairy cavemen to giant, manscaping baby men. I blame modern technology for the demise of fortitude so no, it’s not your fault that all you can do is smoke pot and play video games. Women are so aggressive now, I’d probably hide in a basement, too, if I had to face one. But we have needs, people, so be attentive and you know what to do. It gets easy with practise.

Also on our girls weekend, we played with makeup which is by far my favourite thing about packing snapper. She is doing that wingy eyeliner thing and I am now wearing “Fire and Ice” red lipstick. I just have to make sure it doesn’t smear or get on my teeth, otherwise I think it’s F*I*E*R*C*E and hopefully sends out the correct subliminal message. That is all.

Here is my poem:

your hair is flames

your path is beaten down

who have been there before

for chowder from a can

and whatever else convenient

wrapped in a package

at the corner store

in the darkened dusk

there is a flash of light

you have seen the strange bird

it flies above you

sending a shiver down spine

it stops you dead in your tracks

Its seduction is palpable

its eyes catches yours

the part that is vulnerable

a tip of red lipstick

the air smells of melted wax

the heart is a lonely hunter

and fear eats the soul

and if it was more work than it was worth

you would never know

there is an all-you-can-eat for $9.99 chinese buffet

with a beverage of your choice

in the strip mall across the street

and mounds of gristle and glutenous globs

and an Arizona Ice Tea

the bottle is so pretty

WHAT KIND OF WOLF ARE YOU, WEIRDO? A CHINESE BUFFET? SERIOUSLY? YOU”RE ONLY GOING TO BE HUNGRY AGAIN IN AN HOUR! CUT THE CARBS AND EAT SOME MEAT! WTF? WHY WOULD YOU LET THAT MAGNIFICENT BIRD FLY AWAY? GO GET IT! LIKE NOW! FUCK!