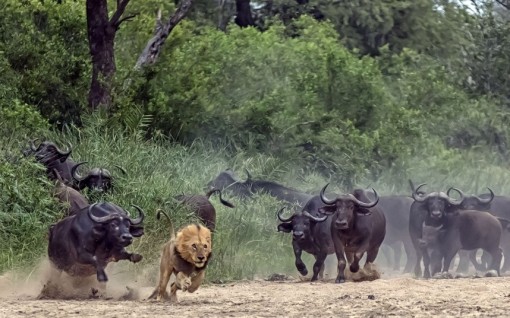 I can’t stop staring at this photo. I want badly to be that lion.

I’m in limbo. I hate it. It’s my least favourite state of being, it’s so frustrating. I have angst in my pants and chewing my nails again. I’d rather be chased by a herd of weird looking horned beasts than be waiting for something that will almost happen, but maybe never, but hopefully will, eventually in bittersweet time, come into fruition. Fuck Zen Buddhism, I am gaping hole of wants.

It snowed today and it stayed all day, bring it on, I say, freeze all the things solid. Then my state of limbo might seem normal.

My gaping hole is frozen open, but with some kind of force field preventing anything from getting inside. You know, money and bones, I don’t even ask for a lot of either.

I fucking hate job hunting. Hey kids, here is a career path you might want to consider that isn’t medicine and you have a particularly cunty urge to play god with people’s lives: Go into the field of “Human Resources.” Apparently it is an actual thing you take at school then get a job at a big company where you can be the first orifice in the human centipede. The caveat is that you have to suck corporate dick so you can’t really breathe through your mouth either but at least it isn’t sewn flush on somebody else’s asshole. Good times.

Last week, I had the worst phone interview by a “human” resource dude from Company X who asked me the regular stock questions that I’m normally really good at answering like, for example, he asked this old chestnut: “What would your co-workers say about you?”  my stock answer reply: “I think they would say I am a team player” to which he replied, get this; “YOU THINK? OR YOU KNOW?”  I’ve been through a few of these phone interviews that they ask 5-6 standard questions to gage whether or not you’re drunk in the middle of the afternoon and coherent enough for a second interview. THEY ASK A QUESTION, YOU ANSWER IT, AND THEY MOVE TO THE NEXT. But this bozo was no corporate cocksucker, he marched to the beat of his own drummer. For each one of my answers, he would bombard me with questions like a toddler does when you’re trying to explain the most basic rudimentary life skill and they get all annoyingly inquisitive and they keep asking “BUT WHY?” when you tell them to brush their teeth with a toothbrush, not a tampon, and sit on the toilet, not in the bathtub, and wipe their bums with toilet paper, not a crayon, and wash their hands in the sink, not the dog bowl. That’s why we made up stuff like tooth fairies and Santa Claus and God’s doctrine so that there would be some invisible head of centipede of humanity and we wouldn’t have to answer so many fucking inane questions and just go on drinking more wine. Anyway, good job, Company X, for hiring a man with the mental capacity of a 3 year-old to weed out your potential employees, how very “Diversity Now!” of you, high five.

When I feel like this, all mangled up inside, but with a voracious appetite for flesh and blood, I need to talk to Jesus. He’ll usually calm me down as long as he isn’t in his self-absorbed mode and going on about how he has incorporated his ab workout into a leg day, I’m not kidding, this is the type of shit he needs to keep to himself or no one will ever love him. He has some serious issues (he lives in his mama’s basement!) but he is good for a couple of cleansing ales and a fresh perspective on life. He lives in the far west, and I live in the far east, so I hardly ever see him and he is not on the Facebook or Instagram, nor does he text because he has a really old Nokia, like from 10 years ago, without a keyboard, seriously. I don’t really trust an adult who does not have a Facebook account even if they don’t go on it, like what are they trying to hide? This lack modern social convention makes him a bit of an enigma but also really annoying because he never answers his phone, so he calls me when he feels like it. But somehow it’s always like he knows when I need him. He is a finely tuned machine when it comes to intuition. Yes, I will get to spew out my problems, he will nod his head and say something wise that will give me some little jizz nugget for thought but then it always ends up being the Jesus Show. who is he banging now and much more fish and foliage should he add to his sleeve tattoo.

We meet at the Court Jester Pub on Monday, he’s there early, and I haven’t seen him since early in the summer. Sometimes I can’t tell if I’m attracted to him sexually because he often wears plaid shirts which I am crazy about along with that beard fetish, as you know from last week’s pussy post, but! he has shaved off his strange little goatee completely and! he is wearing what appears to be 3 plaid shirts, layered. Like Kanye West in his ridiculous new video!

Wtf is that all about? Multiple plaid shirts cancels out the appeal of the one plaid shirt, am I right? Freak.

As for Jesus on Monday, definitely would not hit it, and haven’t, so let’s just keep your thoughts of sexual tension in your own pants.

It’s like he reads my mind and first thing he says is, “I know, I know, I’m wearing clashing plaid, but it’s freezing outside and this top one has bullet proof pockets.”

“Whatever you say, Kanye. I guess you need the protection since you live in dodgy Junction where there’s only two Starbucks per block.”

So we ordered wings…not suicide not but a step above called, with a warning, “Jestercide.” he is a Latin-based beast and I am a Nordic low taster so I think we can handle it…. wait, I don’t “think,” I *know* we can. I don’t get who these people are who find things so intricately flavoured like biryani spice “too hot” but I mysteriously gave birth to two of them.

It turns out there is not enough beer in the world to put out the fire of Jestercide, it’s a sauce made out of ghost peppers. Those are those tiny, seemingly innocuous peppers that if you eat one you can lay on the ground and blow a hole through the ozone layer through any given orifice. You totally have to wear gloves after handling these satanic little fuckers, and speaking of orifices, do not attempt to touch one without washing your hands with paint thinner afterwards, trust. I normally suck the bone dry off a wing, but I am barely hanging on to my life, these little meat infernos are killing me, and I’m hiding some of them under a napkin. Tears are rolling down my eyes, they are intolerably piquant. EVEN JESUS WEPT. Lol. Oh, Kanye.

It was impossible to talk about anything else but how hot the wings were so when I told him, through my tears of physical pain, about my invisible force field of repellent energy that is causing me such angst, he just said, wiping sweat off his forehead with 3 layers of plaid sleeve, “You need a Mexican inside you,” then downed a whole pint of icy cold Keiths. That’s his stock answer for everything by the way. SIGH.

In the meantime, four days later, I have a ghost pepper radiating like an A-bomb inside me, and it’s still searing its way through my innards, A BURNING RING OF FIRE, and it hurts like a motherfucker, but at least it’s something, and maybe if it makes its way out my ass once and for all, it will get around to burning a hole through my force field.

And speaking of breaking the force field, here’s my girl, Katniss: