I saw the Titanic in 3-D over the weekend.  I know we’ve all moved on to other topics and I don’t care what the haters say, it was totally exciting and I have been ruminating about it ever since.  The next night I pretended my couch was a life raft and I was safe watching the ABC Titanic Downton Abbey-like mini-series and then Saturday Night Live waiting for the rescue ship to show up.  And then during Aquafit on Tuesday, I pretended all the bobbling silver lady heads in the water were drowning victims and our pool noodles were life vests and we were flailing for our lives when really we were doing  rocking horse kicks.  Such fun!

My daughter and I went to the local Beach Alliance theatre where I wore my Neil Degrasse Tyson tshirt in honour of his contribution to the newly revised version of the film.  Hipster geek girl ticket taker “got” my tshirt as she must be a Redditor. No secret codes of when the narwhal bacons (google it) were exchanged because she was probably weirded out that an old lady, who could never see a narwhal bacon because midnight is past her bedtime and she was probably alive when the real Titanic sank , was wearing a meme shirt:

Memes may well be the newest lowest form of humour but I’m still laughing.  LOL.

Anyway, apparently the star configuration in the sky the night the Titanic sank was all wrong in the film. After seeing the film for the first time, Astrophysicist extraordinaire, Neil Degrasse Tyson contacted James Cameron in a letter to let him know of this anachronism. James Cameron ignored it. Years later they bumped into each other at a planetarium of all places and Neil asked him why the sky was whack and James said:  “Dunno” then puffed up his chest and said:  “Well, last I looked Titanic grossed 1.3 billion dollars, imagine how much more I would have made if I got the sky right?”  As he is all about the details (change the devil or God to “James Cameron is in the details!”), he fixed it for the new version, so just for that, it’s worth seeing again.

Otherwise, it’s pretty much the same as it was the first time.  Kate Winslet casually walks around in flimsy short sleeve dresses on the deck of the ship like she was in Pirates of the Caribbean. It’s April on the North Atlantic, brrrr.  Dear James Cameron: Did they not have goose bumps back in 1912?  Those would have looked amazing in 3-D.  The rest of the effects were sort of meh and those 3-D glasses tickle the third eye chakra, it’s almost distracting.

Also the second time around (actually the bazillionth time I’ve seen it, but second in the theatre where I am not distracted by the spiders and clutter in my own personal tv watching ashram), I got the gay subtext between Creepy Cal  (Billy Zane) and his man servant Bruuuuuce Ismay  (Jonathan Hyde).  Why else would dude run around a sinking ship chasing Jack because he was on the payroll?  Only a man with a boner would bother.  Did dapper society men in 1912 get their eyebrows groomed? I bet the latent homosexual ones did. And whatever happened to Billy Zane in real life?  Is he crazy?  I have a feeling he is a heap of trouble.

Also just so you know, according to the laws of physics, Jack and Rose could not have shared the raft.  Force of gravity is larger than that of buoyancy, so they both would have sunk, so let’s not joke about it anymore.  And I like a fat Kate Winslet better than this new sinewy version: 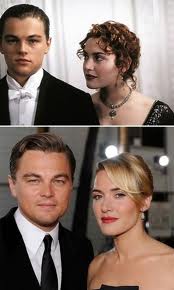 I love how she went around, promoting the re-release of Titanic 3-D talking trash about how she hated that Celine Dion song and about the reversal of fatness between her and Leo.  Don’t get me started about Fat Leo.  I. Love. Him.

Here are my thoughts on Leonardo DiCaprio, who has eclipsed my lust for Fat Vince Vaughn:

He reminds me of  Orson Welles and Orson Welles was my favourite fat man.  Maybe he will even get that rotundo, in which case he will probably not score with the models so much. Speaking of which, I feel like Leo’s chronic modelizing is just because he is not self-actualized. Dr. Drew would know what I mean.  I know of a fellow who modelized for years and when he did settle down it was with a Filipino nanny of one of his spawn (modelizers often breed randomly, I’m looking at you, Mick Jagger).  I feel like it’s a just a phase for Teflon Leo, he hasn’t met me yet and my environmentally friendly ways.  I recycle bacon grease!  Dear James Cameron:  Hook me up!

And on that note, check out this video about the Titanic artifacts and it  actually did melt my cold, icy heart and make me cry, DON’T LAUGH: