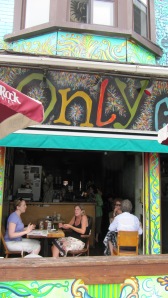 The Only Cafe, Danforth at Donlands

Last week, one of my friends’ Facebook status read:  “I’m off the Island, it was a rough dive but an easy swim. ”  It’s Toronto in July, everyone and his FB buddy is at some cottage somewhere fighting mosquitoes so I took her message literally.  But then yesterday she IM facebooked me:  “I’m single now, have great stories, let’s go for brunch!”  Yay!  Brunch, I’m in!  You know, I used to hate that word “brunch”, just pick a meal and call it breakfast or lunch, why don’t you?  And then I realized “brunch” is just an polite Anglo Saxon term for drinking booze at breakfast.  Most ladies who brunch in the East End go to Joy Bistro and order a mimosa with Norwegian Eggs Florentine so I suggested going there but my FB buddy, Dolores (not her real name) ixnayed it.  “Let’s get dirty,” she said.  So off we went to The Only Cafe for eggs, sausages, and pints of Wellington.  The Only Cafe is that beacon of colour in that otherwise dreary section of The Danforth near Donlands.  It’s graffiti art on the outside and a mish mash of decor on the inside with an impressive selection of beer on tap.  There’s a patio in the front and a quiet one in the back where you can languish all afternoon and chat away without judgment.  Newly single Dolores talked about her breakup (very exciting except that it turned out that “diving off the island” was just a metaphor) and we also discussed the ramifications of Facebook.  She defriended him but he kept her friends as his friends and since they broke up he makes sure he writes witty comments on their statuses so that she can see them and that way she won’t forget him.  There’s a smart man.   She did keep his relatives as her FB friends because the actual process of defriending someone is a political statement that requires quite a bit of emotional energy.  I hate it when people defriend me (I notice!) but then I’m sure my Farmville activity last spring was unbearable when they were reading their updates, so I try not to take things too personally.  And I have always found it strange that Facebook suggests putting a  relationship status in your profile section.  How bad would you feel if your beloved chose the “it’s complicated” as an option?  If you’re a man, let’s face it,  the only reason you choose “in a relationship” or “married” is because a certain someone p-whipped you into it.  If you’re a woman and you choose the “single” option then people think you have cats.   And some folks get all paranoid about Facebook;  “I’m being stalked!”  Nobody is stalking you, honey, unless they are sitting in a tree looking in your bathroom window, don’t flatter yourself.  If they’re looking at your profile, consider yourself lucky that someone cares.  My motto:  Just keep it light and happy and pretend Facebook is like being out in a public cafe where you conduct yourself in a civilized manner.  And you can play that mutated form of Scrabble called Lexulous!  And post blog entries!