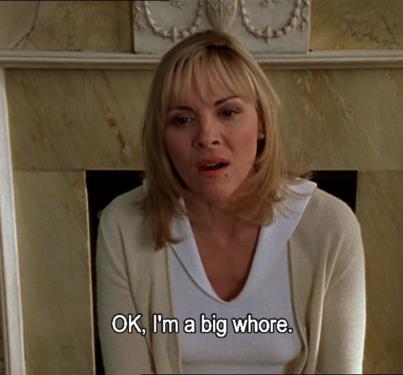 It must be tiring to be a self-appointed conscience of the universe.  Judging the world from such lofty heights must take a toll.  So to those post-mortem critics of Amanda Todd’s tragic story, you have my permission to get off your high horses now.  Careful getting down, horses spook easily so if you get hoofed upside the head, consider it part of the hazards of your job, Judge Dickface McCuntington.  I’m specifically looking at you, Justin Hastings, but all you others can take a break and go back scrolling through 9gag.

I’m not an expert on bullying or suicide but I do know what it is like to be a teenager.  We didn’t have the internet back in my day but we had sluts and assholes and everything in between.

There was a girl, let’s just call her Sally, in my high school who was part of the crowd I hung out with.  She was ruthless. As soon as you let it be known that you had a crush on someone, this bitch would magically swoop in and pussy-block you.  And even before you could uncap the concealer stick to cover up the zit cluster on your chin, she would be holding hands in the hallway with your beloved, wearing his plaid lumber shirt like it was the yellow jacket in the Tour de France.

I’d say that I don’t know how she did it, but I do.  She had a massive sense of self-esteem which was unusual in a teenager.  She thought she was all that and a bag of chips, washed down with a can of Pepsi.  It was that kind of delusional thinking that made her go out and pursue a career in modelling.

“But you are only 5 feet tall!”  I exclaimed when she announced that she signed with an agency.

“You can be petite and be a model,” she scoffed at me. Petite!  She was a stump!  If she was 5 feet tall, half of her height consisted of her oddly formed banana-shaped head.  People go on about Sarah Jessica Parker’s horsey face but her equine sister was living a parallel life and going to high school in Quebec. In spite of her weird proportions, she walked like she owned the planet.  Having taken ballet in kindergarten, she maintained the posture and the stride, holding up her carriage as though her A-cup inverted (yes! they poked inward!) nipples were something to behold.

Of course nothing came of her modelling career because attitude like that doesn’t come across in 2-dimensions.  But those sort of set-backs never seemed to get her down.  She even starred in one of the most embarrassing moments from the history high school.

In Grade 9 during lunch hour one Spring day, we were all sitting outside by the moat, which was a hill in front of the school with a muddy stream running through it.  Some cute older boy was teasing her and pulled off one of her shoes in a tousle match that was just too nauseating to watch so we pretended we didn’t see so we couldn’t help her as they slid down the hill, entwined and giggling:  “Help me!”  Seriously we were hoping she’d just end up in the mud.  However, while she was making her descent downward, she was sliding on her ass, trying to get her shoe back.  As she slid, a big white blob started coming out on the back of her pants.  It soon became clear it was a gigantic-assed spent Kotex pad, the kind that required a belt that only an obese bedridden woman would have worn.  Oh how we laughed, and I don’t care, I am still laughing 30 years later.  So what?  It was my crush she made out with in front of my locker every day for three weeks.

Anyway, after she retrieved her shoe, one of us (not me!) took our sweet time telling her that her pad was hanging out, the bitch just dusted herself off and tied a jean jacket around her waist and strutted into the washroom.  And that guy who wrestled her down the moat asked her out, of course.  Just like Cinderella.

Her home life was so strange that if I described it to you, you’d think I was making it up.  She was the middle of 7 kids.  Her mom was obese which was not all that common back in those days.  She would fashion sarongs out of bedsheets and lay on the couch, supposedly “studying for her masters” while she barked orders at Sally in particular:  “Clean the main floor!” Maybe that’s why we had compassion for her, we saw her as some kind of real-life Cinderella and we didn’t completely hate her for snatching our menfolk. Although we all harboured a grudge with her at some point, we were still her friends.

Sometimes her mom would get dressed and waddle out of the house and hitch a ride on the school bus and make him drop her off at the mall.  Of course this was mortifying to Sally but she would staunchly defend her mother, “She lost twenty pounds on the banana diet!”  How can you tell?  She can tie her sheet up in a second knot.

Her father was the true horror of the family.  They had a female cat that they refused to get spayed and she would get pregnant twice a year.  Sometimes Sally would come to school with scratches on her arm, “Missy had her kittens!  Come over and play with them!”  You’d have to make sure you got there within two weeks, otherwise Papa Kittenkiller would have already bagged them up and dumped in the river.  This was normal to them.

But Sally painted her family life as something entirely different from what it actually was.  We saw her parents as villainous, macabre characters from a fairy tale, she portrayed them as a successful engineer and an intellect with European flare.  It was sad really and the fact that she commit patricide and/or matricide was a testimony to her fortitude.

This is probably how she got away with fucking our boyfriends behind our backs.

Unlike the girls in Amanda Todd’s life, we didn’t gang up on her and beat her up. Boys didn’t call her a slut either. Are some people prone to bullying?  Maybe they possess a kind of vulnerability that threatens us so much that we have to hate them because it is something we don’t want to see in ourselves.

And by the way, why is it that when a man (or a boy in Amanda’s case) cheats, it is the woman who gets vilified?  Here’s what I have to say you, little sisters:  Get used to it.

“Cheating” seems to be an innate sense of entitlement that men are born with, as the Jay McInerney writes in The Good Life:  “..all men need four things: food, shelter, pussy and strange pussy.”

Personally as a 40-something woman, I’d much rather be strange pussy than the regular pussy.  A friend, who is my age, said the other day, “If it weren’t for married men, I would never get laid!” It seems to me that most modern people get married just to placate their fear of being alone. Maybe women need to take a page from Jackie Kennedy’s book and learn to practice the art of Buddhist detachment.  I don’t know, I’m just telling you what I see. I like to say that all the men my age have died in the war, hence my penchant for 25 year olds.

Oh, and back in high school, I got called a slut because they couldn’t figure me out. I did wild things like strip in the orchard and run through the bonfire. If I had the internet back then, I would have been one of those gone wild girls on reddit.com.  I’d streak, I’d moon, I once even answered the door to a pizza man stark naked when I was 15!  I can tell you, I didn’t do it for validation. I felt empowered, the opposite of vulnerable.  I am a naked beast, and like Amanda Todd, I need to be loved.  But fuck off if you can’t take a joke.

I am slut, hear me roar!