Only one of you out there will get the reference of the title of this post and you and I will laugh together at the misery of it all. For the rest of you, suffice to say it’s SPRING MOTHERFUCKING BREAK and it is snowing projectile polar bear diarrhea outside, how’s that for IRONY? If there was actually school, it would be cancelled and declared a snow day for sure…oh, the weather trolls win at this one. Yesterday was sunny and warm and we were wearing shorts and waving to the light at the end of the tunnel and calling it in for some cocktails while we sucked in our stomachs and maybe shaved our armpits…and then today, jokes. Trololol.

*pulls grey sweat pants out of the laundry*

Something exciting happened last week though. I got a message from a reader named Erica from TASMANIA. I know y’all know your geography and are aware that Tasmania actually exists outside a Bugs Bunny cartoon and is the island state south of the main giant blob of Australia, but I am just grooving to the fact that she and her awesome flatmate (Hi, Meagan!) read this blog from such afarness and found it by googling “hot ginger men.” Hot. Ginger. Men. HOT. GINGER. MEN. Sorry, that’s my SEO whore coming out, stay with me and we will be discussing GIRLS. IN. BIKINIS.

Anyway, Erica was on vacation and travelling through parts of Canada and the U.S. and asked if I would meet up for a coffee (lol) or a pint (YES) when she comes to Toronto. I love this kind of thing!  We bantered back and forth while she was in Quebec and I encouraged her to try poutine there because they have the authentic cheese curds and don’t get all pretentious and add foie gras and charge you $17.  I think Quebec is a nice place to visit, even in the winter because both cities, Quebec City and Montreal, have that old scary wretched architecture which compliments the brutality of the freezing cold, it’s like being in a thrilling Gothic horror film. Like you could be brutally murdered at any moment. In a good way. AND THE CHEESE CURDS SQUEAK ON YOUR TEETH! How magical is that?

But here in Toronto, the shite weather is an embarrassment.  I know that sounds weird because the weather is not anyone’s fault *per se* but on the other side of the coin, isn’t it strange to run around with Canadian Pride because “we” won at hockey in the Olympics? Seriously, the day of the men’s final, I did nothing but wake up at an obscenely early hour on a Sunday and drive around trying to find a spot in a bar that served beer at 7 a.m. I am so Proud of my contribution to the Olympic gold medal. As a Canadian citizen, I bitterly pay my taxes and enjoy the “free” healthcare and the rest of the time I grumble about the weather and the shitty potholes ruining my tires. Maybe I am Canada’s insolent teenager and should be Grateful (freedom! diversity! microbreweries!) but seriously, fuck this town. I do not belong and sometimes it takes a visitor to make you realize that.

I met her at the Eaton Centre, and we drove around the city, showing her some main bits that are normally charming but that day was all kinds of depressing shades of grey that don’t involve melting candle wax and orgasms. Who knew what the city really looks like when you actually look at it? I am a happy hermit, normally all I see in January and February is my tv screen. Kensington Market in winter looks like a bleak version Borat’s village but at least there were no righteous neo-hippies banging on my car yelling that I am “idling” and “ruining the environment” at a stop sign…But! Get this: As we were driving around, Erica said: “The snow is so pretty!” And I’m like, wow, this girl is CRAZY! She’s also hilarious and smart and if that’s what Aussies are like, I want to move to Australia. Anywhere but here.

Now it’s Spring Break, or March Break, whatevs, it’s technically not really spring yet and may never be if the weather trolls get their way. The level of despair here has given me my first ever actual  panic attack. Yes, I have anxiety like everyone else, I have insomnia where I ruminate, fret, and number crunch at night, and by morning I’m so beat up, I don’t care anymore. This little episode was different. On Sunday, the Golden Boy, aka Freddy, left for his school trip to Cuba. Cuba! So jalooooz! We got up early, had a leisurely breakfast watching Comedy Central because we both have impeccable time management and organizational skills and  then I drove him to his GF’s house to catch the cab to the airport. I got home, walked into the kitchen and noticed a puddle of water by the dog bowl. I had turned on the dishwasher before I left and was gone a half an hour and jumped to the conclusion that the pipes exploded and some plumbing disaster had occurred and I immediately got wound up so tight (like the Tasmanian devil!!!) that I went into a tailspin. I started to hyperventilate, I couldn’t breathe, and I lay down and made a whole lot of noise of some sort that Betty the dog took notice and jumped up and sat on my chest. Wagging her tail like a helicopter, she forced her snout in my face and licked furiously inside my mouth. Thank gods for furry friends and their awkward methods of resuscitation because otherwise this would have gone on a lot longer and seriously, once I came to my senses, I realized the puddle wasn’t a plumbing disaster of epic proportions but merely some tea kettle spillage. What the hell???  I can’t logically reason with my brain when I get in middle-of-the-night insomnia/fret/mathematic-number-crunching-manic mode, but this little meltdown was in broad daylight and for no good reason. Is this just the tip of the Titanic’s iceberg?  Is my mental state in peril? And why am I the only bat I know over 40 I know who isn’t medicated?

Thank gods of mental health for HBO and Netflix. Let’s cheer up now, shall we?

You know what’s actually a good movie? Spring Breakers. It is chockfull of drunken party gratuitous frontal nudity that you would hope and expect because why else would you click on this:

I guess the American release poster made me think it was a trollop-in-training parade of ex-Disney starlets making duck faces but no! It was a cinematic masterpiece, who knew? Freddy knew. “It’s an art film,” he said when I asked him if he had seen it. Which meant no. I guess kids today don’t need to bother with “art” bikinis when there is so much floppage to scroll through on Instagram. It was dark and moody and really scary and James Franco is sinister as fuck. I had just finished watching “Freaks and Geeks” for godsakes, was not expecting postmodern Marlon Brando.

And then there was the episode of “Girls” where Lena Dunham wears a green bikini in almost the entire episode, even when they go grocery shopping, which now makes hilarious sense since it was filmed after Spring Breakers was released. Her character, Hannah, says “Spring Breakers was a beautiful blend of art and commerce.”  Genius:

Go Hannah, shake yo jello. You make me happy to have HBO.

Also normally I like to  boost my slumping blog ratings with an homage to the Sports Illustrated Swimsuit Issue but I think we can all agree that not a single gym sock in any of the Americas was soiled with this year’s cover:

Ugh, it’s painful to even look at these starving girls. I am not buying the contrived sex appeal here. They are arching so hard, they look like 3 bony centaurs. And oh, how I laughed because my local magazine store opened up all the magazines and displayed the inside cover instead: 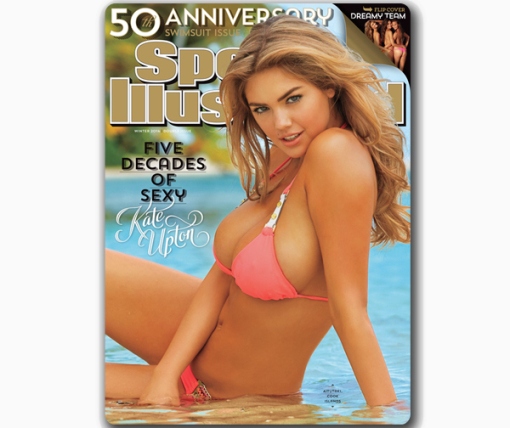 Why do girls in bikinis sell? Hope. Hope for warmer days and sunburns on the top of your feet and bug bites and sand in your cracks and orifices. I think everybody should just shut up already and put on our bikinis and go walk to the store and hang out, Spring Breakers style. If we all stand united, maybe the sun will finally shine. Or we can just warm up and build a massive bonfire and throw our parkas in it.