Epiphany of the Week:  Leggings are pants!

I spent faaaaar too long reading some Jezebel article about whether or not leggings are pants and then clicking on the comment section, Holy Christ, you’d think we were talking gun control, but no, gunt control seems to spark the same amount of brouhaha on the internet.

Me personally, I have been on the fence about the whole “leggings as pants” debate for many years.  Leggings were really big in the mid-eighties when I was a cowgirl, riding the range, and wearing them with a black turtleneck, a leather jacket and Doc Martens, actual cowboy boots, or Converse high tops.  They were part of a uniform of an early emo clubster/grunge movement that you could only understand if you were there.  Then in the 90s, I wore them as a pregnant/lactating cow because EXPANSION.

Then in the late 90s some genius at the GAP decided to add lycra into denim and leggings OUT, jeans IN.

So now its 2013 and Lululemon (and its yoga-pants knockoff army) have been around for at least a decade making non-gym going sane people roll their eyes and go: “Can’t people wear real clothes anymore?” I mean, I agree but!  I am a mesomorph body-type with my moon in Gluttonarious and my guiding stars in Slothera and so wearing jeans can be a daily challenge because ZIPPERS.

So this bloated bon vivant mama loves a legging, especially Black Milk ones, but a Lululemon yoga pant, I am SO over. Every woman in every shape, size, age range is wearing head to toe Lulu AND some of so are some of the men.  If I see a dude wearing Lululemon at my gym, I suspect he is gay or his girlfriend/wife bought him an outfit so other women know that he is taken because no straight, single manly man would ever in his right mind would buy himself a “yoga tunic” in a shop in a mall beside Sephora.

Fun anecdote:  Back in 1987 in my nubile years, I moved to the beaches neighbourhood here in Toronto, and I used to visit a store on Queen Street called “Westbeach” where I had a crush on the owner.  His name was Chip and he was a few years older than me which I liked back then because I had big brother issues.  He was like a tall, hunky surfer version of Clark Kent.  I used to flirt wildly with him and he was really kind to me and one day in the summer, he and I rode our bikes downtown to see the movie “Stakeout.”  It was more like a buddy date on his part and he told me that he was probably going to move out west soon because he had a girlfriend there.  Of course he did. He did end up moving and 20 years later founded the company Lululemon, which is hilarious because MILLIONS OF DOLLARS.

Whatevs, if the pheromones had worked out for us and we fell in love the way I had intended, I probably would have told him that yoga pants were for losers and we need to focus on jeans that had drawstrings and side pockets that could hold a six-pack of tall boys. I would have been so wrong and yet so right. The first world would have been a whole different place.  You would probably be out on Tuesday playing bingo instead of practising your sun salutations at your local Downward Dog studio which have become as ubiquitous as nail salons.  I am the worst wife ever.

Anyway, back to the modern time legging debate.  According to the Jezebel article and its commentators, leggings can be considered pants if the fabric is thick enough. Not all leggings are created equal. You do not want the kind of stretchiness that makes the fabric sheer and shiny that you see the ass tattoos, the cottage cheese lumps, or the whale tales.

As for camel toe, these are my thoughts:  I think it is okay AT THE GYM to be wearing leggings/yoga pants where you can see a mound and an EVER SO SLIGHT dolphin lip formation.  However, it is vulgar to be able to count how many slices of cold cuts on each side of the beef curtains.  Although I think men appreciate the display because so many women these days are muscular like dudes that they want to check out if you have a tuck game going on.  Pro tip:  If you are a single lady, you can wear your vacu-seal yoga pants out of the gym and run your errands pretending you didn’t have time to change and probably your local butcher will throw in a dozen free duck eggs to your order.

My gym has a store and on their sale rack, there were a pair of really cool black Puma leggings with a kind of retro 80s constellation print, but I tried them on and my Herculean calves created such a stretch that the entire pattern disappeared and turned white instead.  Ugh!  Less spinning, more yoga for me.  I used to have normal calves and then I became a bike courier, 25 YEARS AGO, and now I have legs like a Scottish rugby player. I once had an argument with a trainer who some sort of convoluted theory based upon Britney Spears, pre-Federline, and according to him, she was the model of female perfection. By his estimation, women could not build bulky muscles like men and Britney was an example of finely tuned ectomorph and she would be a lean machine all her life.  I said:  “Dude, Britney Spears is my mini-me, you just watch that mesomorphic bitch balloon out after she has kids.”  He shook his head like I was crazy. 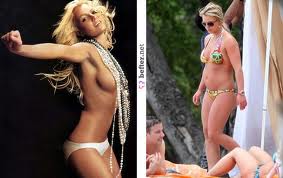 I think we can all agree I was right.

I’ve been dying to slip that gif in somewhere.  Anyway whoa is me and mesomorphic problems, I have to figure out how to iron out muscle while burning fat and so it might be time to consult Gwyneth Paltrow and her goopy friend, Tracy Anderson.  Apparently it is all about working the tiny muscle groups, not the big ones!  Who knew?  I know you are probably an ectomorph and don’t care and I don’t time have time for you either so let’s move on to more pressing matters:

Rihanna and Chris Brown are back together!  I know this is like the worst thing ever and how stupid can a woman be, let’s all go hide under Gloria Steinem’s bed for 72 hours.  But you know what? I am excited, you go pop the corn and I will make the pitcher of Negronis, the official cocktail of relationship disasters, and let’s watch this mess escalate. I don’t care about Rihanna, we have warned her on Twitter and she responded on Instagram holding her blunt up like middle finger, and she is rich unlike some non-famous battered women who are stuck in hell and can’t get out.

Why is Rihanna so stupid?  It’s not her fault!  You can blame it on simple biology, it’s hormones, specifically oxytocin, NOT to be confused with hillbilly heroin, OxyContin. Women make oxytocin when they are pregnant so that they bond with their baby and become nurturing even if she is a cold fish.  It comes in handy because sometimes a baby is a screaming monster and you just want to throw them out the window but you don’t (hopefully!) because some oxytocin-drunk inner voice tells you not to and saves you from going to jail.

Women also make this hormone when they have sex with the same man more than once.  Hence Stupid Rihanna and Chris Brown.  I think we all know personally know a woman who is with some loser dude, who is a drunk or married or both, that we think: “Holy shit, what does she see in that loser?  Doesn’t she see that he is an ugly douche and a liar?”  But no, she is all like, he is so sweet and vulnerable, and I must follow my heart and protect him in my pillowy breasts as the world is such cruel place for such a loving man and together we are beautiful and love is natural and real.  And you just want to slip her the antidote for this oxytocin haze, maybe it’s a few Negronis, and then she will see the light.  An oxytocin-drunk woman never does even with two black eyes.  STELLAAAAAAAAAAAAA!!!!!!

By the way, men do not produce this hormone, which why they can go righteously planting their seeds left, right, and centre as it is their duty to mankind.  However, a couple of months ago,it was discovered that if you give them oxytocin, like in a nasal spray, you have yourself a loyal human pet.  But you really should ask yourself, do you really want a giant monkey?  Maybe a dog is better.

I’m looking at you, Rihanna.  You know the other day, I saw a picture of Chris Brown and I have come to think that he looks like his family tree might be more like a Mulberry bush, where the branches are entwined and connect at the bottom.  Inbred, is what I’m saying.  He looks like Pepper the Pinhead from American Horror Story Asylum:

I can’t wait to see what their babies look like! I am sure she will be an awesome mama exploding with all the oxytocin-induced lactation to feed the entire world!  Love is fucking hilarious.  And leggings are pants, I don’t care what anyone else says.