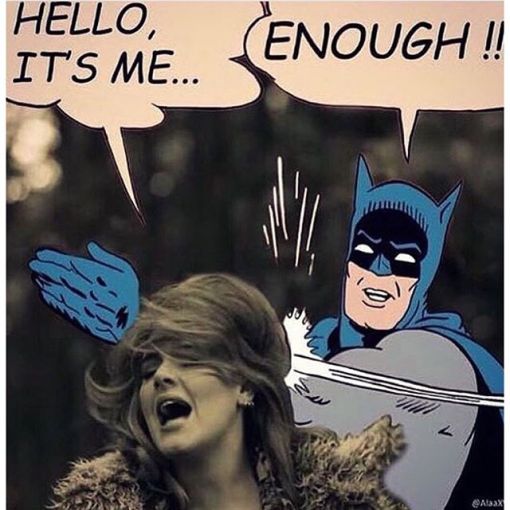 HALLOO FROM THE OTHER SIDE!

Don’t get me wrong, I love Adele as much as y’all but someone please help me get that ear worm out of my noodle bowl. Also I belt it out all the goddamn waking hours of the day AND IN THE EQUIVALENT OF CAPS BUT IN ACTUAL NOISE and I forget I am committing a crime against humanity when I sing out loud.  Also I need to tell you I hate the lyrics to this song. Normally I don’t pay any attention to what singers sing except for maybe Morrissey because he is me and I am him, all happy in the misery in the haze of any given drunken hour but! I have a feminist daughter who is in a band with two other young women (don’t call them a “girl band” tho! )  and is all about empowerment of the female voice. She’s okay with these Adele lyrics but I will defend my case later. She is not okay with Robin Thicke, obv. This is a good story for the usual preamble tangent I’ve been known to take you on:

The other night she and I went to our gym’s Christmas party. We drank a bunch of wine and ate some turkey buffet, saw some prowling peeps we haven’t seen since last party on the same mission as every year. It’s an annual event worth partaking for sure. Good times. After dessert and some low noted fart seepage, I could have ended it right there and Ubered home to blast some big trumpet tunes in my sweat pants but there was an actual live band that came on. ‘Twas this configuration:  3 ripe middle-aged dudes in fitted dress shirts, unbuttoned just so and wearing those kind of jeans with bleached out whiskers around the crotch area, you know what I mean. Like none of you boys is Tom Jones so you have to visually fake a bulge by implying one exists the same way a Kardashian has to fake a contour with ten pounds of slap along the nose and jaw line. And but of course, they played “Blurred Lines” maybe the second song in and everybody rushed up to the dance floor. This kind of shameless spectacle fills me with an unsettling mix of intense embarrassment and pure voyeuristic delight, I love it so, so I puckered up my sphincter for more festivities. Young and old, the gym folk, who all clean up remarkably well by the way, were gyrating as awkwardly as those vapid topless supermodels in the video.

YOU KNOW YOU WANT IT.

Well, well, well, you could see a beehive of bees buzzing in the bonnet of my righteous daughter, who by the way just turned 22, happy birthday, my baby.

This her shouting while we were sitting at our otherwise abandoned table underneath one of the deafening speakers:

“Why the fuck are they paying this song? I’m so mad! It’s basically saying promoting violence against women!”

Huff, huff, puff, puff, blow the house down, she went on:

“The lyrics: ‘Tried to domesticate you!’ Ugh! Of course you fucking dickhead!” Steam coming out of her ears.

Who listens to these things this closely? Then she said something about something being “so big it can rip your ass in two.” I am so old now, I’m hard of hearing but that sounds like good times to me. But I let her have the floor.

Turns out there’s a million things she pointed out against the lyrics of this douche ditty but you cannot fault it on its catchy tune, right? But no, she put on a deep prick voice and even made a mockery of the cute “hey, hey, hey” chorus. I love that part! “Hey hey hey!” I used to croon in my room, whipping my crumb encrusted bra off at the end of the night, as a slave to its commanding presence as the ear worm of the summer of 2013. Also because of this song I can partially answer the age-old existential question: When a tree falls in a forest, and no one is there to hear it, does it make a sound? Maybe a subtle noise… just because sound travels and echoes and whatnot, but! When a tree is dancing alone half-naked, is she visible?  If her room is brightly lit and it’s night and the blinds are see-through, I think for absolute sure, she can be seen by the unknown passerbys under the soft dewy glow of the moon. And she obviously has problems.

Anyway, as soon as the band took a break (they played resort reggae! LOL: “One Love” holy god), she marched up to them and gave them a piece of her mind, ripped them each a new one with her searing asshole blasting rhetoric. That’s power, sisters. I was far away, I didn’t hear the exchange but one of them looked like slightly scared albeit dismissive and she came back to the table all mad as fuck. “This is a losing battle,” she yelled. I think we got more drinks, this night wasn’t over yet. Then shortly after, the band guy with the least amount of whiskers on his jeans came to our table (which at first I thought was nice) and said: “I’m sorry, I don’t want you to think I wasn’t listening to what you had to say, I have two daughters myself… blahhhhhh, blah,blah,” Oh yes, righteous dude, play the your-precious-jism-spawned-a-female-child card, and then his words started to melt into a bunch of dumb man gibberish about how he *pounds chest* has to make a living and therefore must play the songs that the people want to hear. Maybe a valid point but I’m pretty sure dude has a day job as an electrician or something. This gig just feeds his “soul” aka banana-in-his-pants-ego. Plus the people were just as happy to sway along to their white man reggae abomination as anything else. Bob Marley never offered anything but a big doob and an honest bone in his single bed, which was prolly only half chub and wasted, can’t be complaining about his lyrics being degrading to women. And please do not ruin Bob Marley for me and nit pick through his catalogue and send me something like “skanky woman” means something terrible, nobody understands what he is singing about anyway.

So anyway, I’m proud of my daughter for speaking out against the douchebaggery messages we have to put up with in the mainstream music and entertainment industry. She has her mother’s moxy! I don’t know what that word means either, but it sounds very Barbara Stanwyck-y, my role model, google her if you’re too young to know who she is. And she is the opposite of passive aggressive. She is just aggressive, period. Which I love! Passive aggressive people should stick to their own kind and play their games in their own leagues because I cannot deal.

Which brings me to Adele’s “Hello” lyrics. Again, I don’t generally care what people are singing about unless they’re funny. I hate funny songs, comedy belongs elsewhere not in my car radio or my ear worm salads. I only like angst ridden lyrics which seems to be most songs anyway, and definitely all Adele songs, duh. And here is “Hello,” and pay attention to the last line:

Hello, it’s me
I was wondering if after all these years you’d like to meet
To go over everything
They say that time’s supposed to heal ya
But I ain’t done much healing
Hello, can you hear me
I’m in California dreaming about who we used to be
When we were younger and free
I’ve forgotten how it felt before the world fell at our feet

There’s such a difference between us
And a million miles

Hello, how are you
It’s so typical of me to talk about myself I’m sorry
I hope that you’re well
Did you ever make it out of that town where nothing ever happened

“But it don’t matter it clearly doesn’t tear you apart anymore” THAT!!!

WHAT THE FUCK???  Has this ever happened to you? Someone assumes how you’re feeling or what you’re up to and they state it like it’s a fact. They call and leave a message and they say something presumptuous like “oh, you’re probably out having an awesome time with all the beautiful people at some rooftop hotel pool party drinking absinthe or having sex with the hot guy from the gym” or whatever, of which none apply. You missed the call because your phone slipped into the couch cushions while you are watching “Portlandia” in your sweat pants , drinking leftover Pabst that some Tinder ape left the last time you actually had sex 3 car washes ago. That’s how I keep track of time these days, by car washes. I’m stretching them out now, letting the rain take over, so the proverbial toilet roll, time’s other metaphoric unit of measure, slows down because fuck!  It’s a slippery sleigh ride to the ice floe, isn’t it?

And it’s possibly the worst when someone who dumped…oh, hang on, no they goddamned ghosted you because let’s face it, that’s how Team Passive Aggressive rolls, calls you up after 12 car washes, 164 rolls of toilet paper….In fact they wait the entire time it take you to get over them down to the last square, somehow their spidey senses know  you’re finally done, so they swoop back in: “Oh hi!  I’m sorry, I hope you’re well, blah blah, let’s meet for a drink, I miss you and your little dog!” And before you know it, you’re in love with them again, because you had a weak moment where you convinced yourself they were probably just going through some inner turmoil that had nothing to do with you. Bitch, please, their “inner turmoil” was just their dick pointing in a different direction.

“I must have called you a thousand times”….oh really??? A thousand fucking times? How so? Because I have call display, and if you had tried to call that many times, I would have blocked your ass. Oh, I never seem to be home? If you’re calling me on my landline you know for a fact I never answer that phone! Somebody’s pants are on fire here. And if you had any moxy at all, you would show up at my doorstep and brought me a fucking bucket of Popeye’s thigh meat because you know I love that shit and you wouldn’t be writing an annoying zillion dollar platinum zinger hit song for everyone else on earth to hear oh, what an amazing singer you are and how goddamn faux-sorry you are. BECAUSE IT’S ALL ABOUT YOU.

Anyway, I hate these lyrics, they are the anthem of every passive aggressive fuck boy and the only reason they are daughter-approved is because it’s sung by a woman. “She’s the one who broke the heart,” she said in defence, like it’s a good thing, which admittedly it kind of is. But why is she trying to claw her way back in then? It just means her passive aggressive dick is inside out. And also, why would anyone call a thousand times and not just send a text? That’s a more civilized approach to getting back in contact with someone you feel bad that you fucked over. Still, it’s a good tune and Adele is awesome and I wish I could master that winged eyeliner game once and for all. HALLOO!