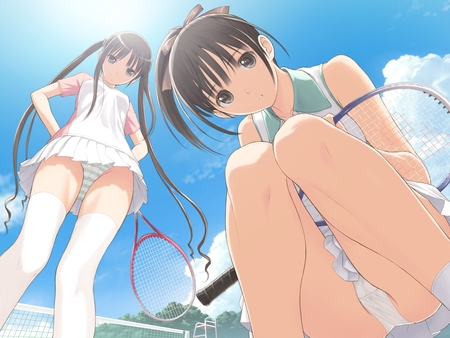 Relax, just jokes, there is no “pro tennis strike.”  But that is my name, Kristin Peterson,  in an anagram.  Cool, huh?  I figured that out using some loose Scrabble tiles when I had no one to play with.  My family and I were once big on Scrabble, we played all the time.  I don’t play any “board” Scrabble anymore, just the mutated on-line version called “Lexulous”  featured on Facebook.  Talk about upping one’s game.   If you make up a word, it won`t let you put it down.  There is an on-line dictionary of all the finest words known to humanity, including the English Sowpods version of the word `jiz`with one zed or zee.  When I (and my Scrabblemaster Goddess sister, Sue) started playing this a few years ago, the rest of the family began to look like nitwits.  One Christmas, our normally brilliant graduate student nephew challenged us on words like “qi,”  “xu,” and “za.”  “These are not words!”  He protested, more than once.  “Yes, they are words, we have learnt them on the internet and we are better than you at this game,”  I said, trying to be patient.  When at one point he put down “Iran” and everyone let it go because we are easy-going Petersons, I had to put my foot down.  “IRAN IS NOT A WORD, IT’S  PROPER NAME OF A COUNTRY!   I CANNOT POSSIBLY PLAY WITH YOU PEOPLE ANYMORE!”  It was too painful, I would rather play X’s and O’s with a small child.  I think that was the end of that family nonsense.   I look at a Scrabble board with no sense of nostalgia whatsoever.  I am in a much better place, I can play Lex on my i-Phone!  Anytime!  With strangers even!

I write this while the US Open is on.  Watching tennis is my porn.  I can spend a nice sunny day sitting inside, happily watching a match during any given Grand Slam.  The US Open is the show pony of the tennis season, for sure.  Certain smug players have worn sequins and tuxedo shorts during their matches.  I have seen real life tennis and I have watched it on tv and I will pick the latter every time.  The camera picks up everything that you can’t see and then some.   I’m talking about the stands.  They love to shoot the players’ girlfriends if they are super hot, which they always are, all blond with their Versace sunglasses and stoney expressions on their vapid, chiseled faces.  The US Open always has a celebrity or two in the midst.  Famous people sitting in an audience of anything is just such a weird juxtaposition, like seeing your teacher in the grocery store and you look in her basket to see what she is buying  and suddenly she is the most fascinating person ever with her haul of  celery, Triscuits, and Laughing Cow cheese.  Today, the enigmatic Stanley Tucci put his bald head on the blimp’s radar and the who-the-hell-does-he-know-to-get-such-great-seats on everyone’s minds.  Such an elitist sport.

What I love about tennis is that while I might plunk my English Sowpods arse on the couch and start cheering for a certain player, I will inevitably end up all adrenal red in the face, yelling at the tv, because I am now on the other player’s side.  I realize it is the excellence of the sport that  I am cheering.  And even a lesser player can show a unique style and elegance that can be celebrated.    These odd players make the greater ones up their game.  When the top seeds are shining it seems like it will last forever.  And in a way, it does. They become legends.   Bjorn Borg?  I’d still hit it.  Call me!