Happy New Year, peeps!  The holidays are a massive bitchfest, aren’t they?  So many elephants in all the living rooms of all the suburban/urban bourgeoisie, thank the gods of groceries that there are enough peanuts wreaths and brie wheels to keep them fat and fed that they don’t notice that they are vulture fodder.  Elephants are too busy being elephantile to notice the other animals and their ridiculous habits.

It occurred to me that this year I am the 2012 Grand Elephant that they squawked about when I finally left the room to give birth to the yule log that was stuck up my proverbial chimney/colon because I forgot to drink coffee on Christmas morning: “If only she would find an age appropriate man….she should go to teacher’s college…she should sell Avon….why doesn’t she do something with her hair?…et cetera…”  They worry about me, I guess.  Every family has a Fredo.

Oh well, I’d rather be a big honking elephant than a meerkat or some other dumbass creature that moves in packs indistinguishable from each other, and dispensable because they are ALL THE SAME… even if they are so cute (stop reading this shit right now and run and go see the film “The Life Pi” now and you will know what I mean).  Don’t kid yourself either, Golden Child, I bet even you have a massive trunk and a curly tail that have been whispered about in by the light of the downstairs beer fridge by your relatives at least at one point.

Anyway, I have resolutions and inspiring thoughts for the new year that you can use too and best of all, they don’t involve cutting out carbs because CARBS ARE AWESOME:

DON’T BE SO HARD ON YOURSELF!

I just spent the better part of the last decade beating myself up for all my mistakes but what is the point in that? Then I made the same mistakes all over again just so I could beat myself up more! I’m addicted to self-loathing! Why not just go out and get a bunch of piercings? Instead, I’m going to do more yoga but not that crazy Bikram because it makes me get all in my head and completely lose my humour and I need it for blogging purposes.  There’s a class called “Restorative” where you lay around for 90 minutes and pull off 5 poses and the teacher, who is actually a crazy bitch who will run you over in the parking lot, comes around and massages your temples with lavender oil and makes you feel like everything is going to be alright, Jesus Christ Superstar-style.  I’m telling you, she is a genius, and when you walk out of the class, you feel like you had a sexy nap by the ocean and dare I say it, you feel like you can conquer the world.  Roar!

PUT A POSITIVE SPIN ON WHAT YOU PERCEIVE AS NEGATIVE! 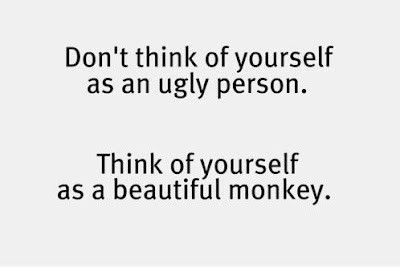 I know a lot of people are talking about “gratitude journals” and you should write about what you are grateful for everyday and then as if by osmosis, your life will change for the better.  Let’s not kid ourselves, we all know what you’ll have by the end of the year:   A leather-bound book with two pages of tentative chicken scrawl:  “I got a parking spot at the liquor store!” and the phone number for Pizzaiolo on the back. Rather than waste time on a journal that will only embarrass with its lack of entries, why not join Instagram and put all your pictures of pizza slices on there?  When you scroll back through it at the end of the year, you will be satisfied with all the glorious food you have eaten and the weight you gained won’t be in vain.  Social media rocks!  Also with Pinterest  I put up pictures of shoes I want and this ring I love, I want it so bad it hurts: 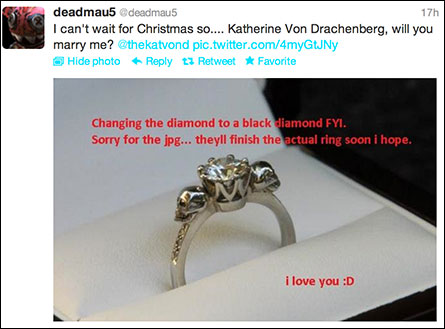 I’m just putting it out in the universe so that in case I find an age appropriate man with a bank account and a human name, he can get me this and I would be ever so grateful that I would take a picture of it on Instagram #diamondsareagirlsbestfriend!

REAPPLY YOUR LIPSTICK AND BRUSH YOUR HAIR!

I know, this seems like a no-brainer but the other day, I dumped out the contents of my purse and 8 tubes of lipstick and an owl shaped lip gloss (and yes, I took a picture of it and put it on Instagram), I realized I only put on slap in the morning so by the time it’s 11:00 (aka, beer o’clock), it has been licked off by my voracious tongue and completely ingested by lunch.  By mid-afternoon my lips are all cracked and gunky, what is the point of that?  Who is going to buy a ring for a woman with meth lips? Reapply, lazy ho!  And if you insist on growing your hair long, stop all this OCD twirling and chewing and brush it once in a while.  Oh, and use Moroccan oil to make it smooth and maybe run a straightening iron through it. Your hair represents the state of your mental health, so pick the french fries out of it before you go out in public.

FINISH WHAT YOU START!

By the way, in India they worship elephants as a symbol of the Highest True Self.  So there, Pinterest this under I WANT: