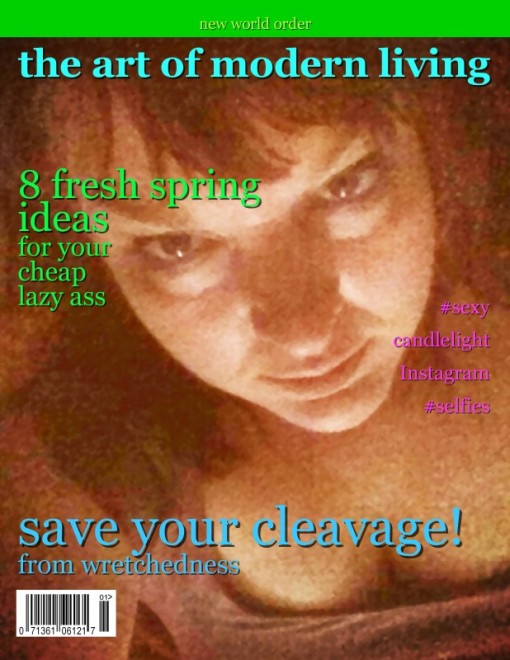 I’m sure you’re not surprised but Miss Contrary, aka moi, is not even remotely excited for spring. It’s not that I like the cold but I just don’t care for all the brouhaha and chores that go into April. Let’s not forget you have to do your taxes, rake all the garbage from your front lawn, get your winter tires changed, clean your front hallway of tiny Pomeranian turdlets that have petrified into the tiles and created a texture that kind of blends in with the slate so maybe just scratch that…and then the worries!  Worry about your spring wardrobe, worry about your garden hose (fuck, yes, I worry about my garden hose all winter long, I don’t even know why), worry about what happened to your missed period in March (shut up, it’s coming), worry about North Korea, worry about that garter snake your neighbour saw slither into your basement in the fall and if its going to be waking up from its winter orgy slumber with all its snake friends in a big giant pile of snake salad underneath the pile of crap that didn’t sell at the Italian garage sale.  Cannot deal.

Also I have had enough rounds of spring fever to know that where there is hope, there will inevitably be major disappointment.

Yes, spring is exciting, there is definitely a natural mojo boost from extra sunshine, not just those annoying rogue beams that peak out from sides of your drapes when you take to the bed to watch endless hours of Downton Abbey on your laptop. It’s time to get outside, lazy ho!

The warmer weather brings out the people from HBO hibernation and everybody wants to sit on a patio. The pressure is finding the right patio with the optimum possibilities. The perfect patio has all the best sidewalk traffic, with a parade of motley humanity that will keep you entertained. In my neck of the woods, the Beach, it’s all same old year after year: An endless stream of boring ass couples with their ugly strollers and their purebred dogs who lead the way like majestic protectors of their boring ass masters. Why so loyal, dog? You want to say, break free and chase some squirrels and run to the lake and roll in some dead fish. I used to be one of them, my husband and I, and my custom slip covered Peg Perago double stroller…our Shiba Inus used to get loose and bolt every chance they got which was HILARIOUS!  *sigh* Was that fun or a pain in the ass? Snap out of it…now I am a crusty, single old bat with just one lunatic mutt who dive bombs for every crumb and canine anus that passes by. Definitely not hilarious. I need new hood and a new game plan, that’s for sure.  I have some ideas (which doesn’t include dog training) that I am going to implement this spring and I’m going to share them with you and feel free to comment some pro tips of your own because I love hearing from you:

1.  Last post, we discussed the art of flirting and I got a lot of feedback in my in-box.  I’m going to read a book, the sequel from the classic “Men Are From Mars, etc” and it’s called “Mars and Venus on a Date” and perhaps we shall discuss it in a future blog post (if I actually get around to reading it). Meanwhile, I feel a million dollar idea coming around like we need another take for the disillusioned souls who have had their heart ripped out and shat on, something like Men Are From Uranus (obviously) and Women Are From Pluto (because that’s a planet that doesn’t even exist and you know how we’re supposed be all like difficult and stuff, *eye roll*).  Anyway it’s real time right now and I am back at the same place with Refat, the very same bartender who was ignoring me last post and now even though the place is packed, he came running up to my table which is in the same spot as before.  “Can I help you, Miss?”  The power of cleavage.  “I’d love a pint of Stella Artois, Refat, please!”  I know, I sound like one of the dumb cunts on “Downton Abbey” ordering a footman around but I have been fervently watching the show in marathon sessions and it’s given me some lessons in poise and lady manners.

2.  I need to find a new crush, speaking of Downton Abbey.  One of you wrote me last week and said “I think it’s awful that you would flirt with a married man.  I take offence to that!”  I apologized profusely because I am stupid but the more I think about it, the more indignant I get. I was married once and I let ridiculous bitches flirt with my husband which only gave him a mojo boost and therefore more cache, and it was beneficial for everyone.  So fuck you, I will practise flirting on your husband whoever he is and you will put on your big girl pants and suck it up.  Anyway, it’s just FLIRTING and I’m really not that good at it.  My current crush, who is tits on a bull when it comes to flirting, is of course married, but to some hooker who runs a tight ship, a lady who most probably has her man’s balls in a vice grip. Men love that type of woman for some reason,I know it’s true because there are entire Tumblr blogs devoted to macerated nutsacks.  Anyway, I told my crush I watched an entire season of “Downton Abbey” over the weekend.  And he said: “Downton Abbey is a really good show.” Oh… I know, right?.  And I, incredulous, said:  “But Downton Abbey is a girls’ show.”  And he replied, chest deflating:  “Well I’m not the one who puts it on.”  And then he went about his business with his head down whilst my lady boner wilted to thirty percent of its capacity. I might still carry the tiniest of torches because cute! But! if somehow I find out he is watching “The Bachelor,” which I suspect he is, I will never look at him the same way again. So I need a new crush, one who watches hockey and maybe some reruns of Seinfeld while he is unimpeded to scratch his free wheelin’ balls in front of the lady he loves. Bitch, please, it’s that simple.

3.  Laura and I went out on Friday night to see a bar band. We went to Dora Keough which is a pub-type place full of wretched professional drunkards.  She and her friends go out regularly and they know how to swill the beers and shake their hips.  I am a day person, a vodka drinking hermit, as you know, a reverse vampire who wears pyjamas at 5 pm.  Laura is “taking a break” from men because of their tedious game-playing ways.  But me, I am always zealously on the prowl, I scanned the room:  “Everyone here is a circus freak!”  And before y’all accuse me of being a stuck-up picky bitch, I am hot for Louis CK who is a balding, chubby, ginger hunk of cerebral sexiness.  So don’t bust my balls if I have a certain standard.  Anyway Laura, who is all off the men and not paying attention to anyone but the band, gets asked to dance by a young dude! He is bat-shit crazy but still…we have decided that Laura has some kind of magical powers. a mojo so fierce and fine-tuned that we need to scrape her armpits of her pheromone debris and chemically recreate its essence and we will be rich, I tell ya.  To which I ask this question:  Would you rather be really rich or have Laura’s sizzling hot fucking mojo?  I pick the mojo. The most valuable commodity in the world, in my opinion.

5. It’s also time to exfoliate.  Even though I appear a little bit casual at times (read slovenly), I am massively vain when it comes to skin care.  I think if you are a lady of a certain age, you simply have to buck up and get procedures done.  In my opinion, you don’t have to spend a shitton of money on skin care at home but where you should drop the big ones is at an aesthetician who doubles as a nurse just as a side job.  You need a wand wielding bitch who can shoot out laser beams into those gaping pores and rejuvenate with medical proficiency. Don’t get me wrong, at home I put rotten avocados and honey on my face while I watch my Downton Abbey, but there comes a time for professional restoration.  Save your pennies, get some Fraxel or a Vampire Lift, but until then and before you enter another yoga class, get ye a salt scrub even if its from your kitchen cupboard and rub it all over your ass because scaly skin is gross.

6.  I’ve been taking some #selfies (don’t judge) for recreation and going all around with the iPhone lens and noticed my Hello Kitty tattoo has changed shape 😦 and even disappears at certain important angles. Ugh! This means a fitness goal of some sort which is something even my lazy ass can handle.  For some reason I like the gym (three words: hot tub jets) and if I change my time that I go, I might be able to find a new crush, hence killing two birds with one stone. Snap!

7.  I’m going to make a scotch egg.  Labour intensive, yes, but my lazy ass enjoys a culinary challenge.  Check this out, you will looooove it, it is all about eggs but is sexier than “Game of Thrones.”  I’m in love with Heston, is he gay or just British? The scotch egg is around the 12 minute mark but you are going to want to watch the whole thing and maybe make your own mayonnaise, yo. And THAT is not a euphemism.