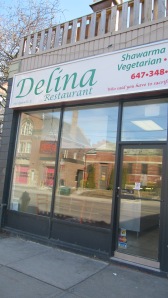 When I was pregnant 17 years ago (!), after the the first trimester where everything smelled like freezer burn and tasted like Crayola crayons (yes, I know what they taste like, I was one of  those kids who ate weird things like cardboard lollipop sticks, Bic pens, and satin blanket trim),  I developed an insatiable hankering for falafels which ironically, was my default hangover food in Montreal because this one particular Middle Eastern restaurant was the only place opened at 4 a.m.  For 6 months as my stomach swelled,  I traveled near and far to find the perfect one and finally in my 7th month, I found the my favourite on Bloor St West near Christie.  It was quite a hike from the Beach but I had to have it!  Something about a falafel that is all about texture and taste.  As a rule, the best food seems to be crunchy and smooth at the same time.  With a bad falafel,  the chick pea balls are overcooked and become too hard  so the inside is dry.  The perfect patty is slightly crispy on the outside, and inside is grainy and moist. Anyway my pregnant craving became an obsession and because of my expansive hunting, I consider myself a connaisseur of fine falafel.  But after my daughter was born, the trek to Bloor and Christie  became too arduous and so my appetite waned. Then last November I was walking by this place after yoga class and something drew me in, probably the smell of tahini triggered some memories but whatever it was, I am grateful.  I ordered my first falafel in years, although maybe I had one at the CNE at some point, I can’t be sure… whatever  happens in that food building, stays in that food building because it’s usually a huge mistake.  Anyway, Delina’s falafel, not only is the BEST FALAFEL  I have ever had, I was able to wolf it down while I walked home….an impossibility with every other falafel I have ever had.  Delina’s falafel is wrapped and swaddled like a newborn baby, then pressed in a grill to make it even more compact.  And there is no shortage of condiments inside, tomatoes, tabouli, tahini…terrific!  I went back for 5 days in a row.  There are other things on the menu as well of course including shawarmas and vegetarian sandwiches and the service is fast and friendly.  Best of all, my falafel is $3.49, which is cheaper than the big box of Crayolas!

How perfect is this? #soup #elvis