Thankfully my son doesn`t read my blog so I can talk about him while he sits up in his room playing Pokemon Revenge for hours on end.  I know what you are thinking:  “Foolish woman, she thinks her teenage son is “playing Pokemon” alone in his room, yeah right!”  Believe me, I wish he were watching porn, then the odds would be better that he moves out the house before he is 30.  He also plays the ukulele.  And sings.  He is bilingual as well:  English and Caveman.  Caveman is pretty cryptic, but I can still understand it from my teenhood:  One grunt (Humh) means “yes” and two grunts (Humh mhum) means “I don’t know” which could mean yes or no.  Sometimes with teenagers “no” means “yes” because when you ask them if they want a grilled cheese sandwich, they might grunt out negatively but when they see you with yours, they say: “Where’s mine, Mother?” and then their diction is perfect.  To add even more confusion, I asked Freddy what he wanted for Christmas and he said:  “Ham and cheese.”  I know what you’re thinking:  “Foolish woman, he is probably smoking salvia up on his deck and he is so stoned that he wants food for Christmas.”  Believe me, I wish he was smoking salvia, then I could buy him a real fancy bong with a matching lighter in his stocking.  Like seriously, a 14 year old man-cub is probably the worst person to shop for so he is just getting more of what he already has: socks and underwear.  Let’s explore the world of flannel and fleece and expand his wardrobe a bit.

So on Monday morning I went to the Eaton Centre.  I consider myself to be a Ninja Shopper and I picked that time slot because I figured it would be the slowest and!  I was prepared from the Tena pad on out.  I wore light layers and running shoes (I only relectantly wear these to the gym), I dumped all extranious material out of my purse, including my camera and you know how I like to take escalator shots.  I ate beforehand so I wouldn’t be tempted at the food court.  I did everything right, or so I thought.  It only took an hour to reach my breaking point where fatigue and despair turn into self-loathing and I know myself: when the self-loathing steeps, it evolves into rage.  Just like a Pokemon, or a Pokemom in my case.  Fight or flight?  I fought a bit longer but went home with a better plan, thanks to the inspiring Swarovski Christmas Tree which is like a beacon of beauty and light amid a whole lot scaffolding because they are still renovating: 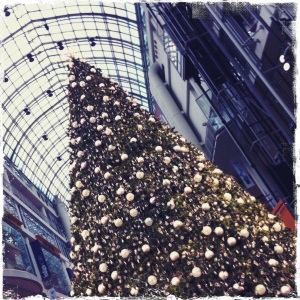 Swarovski tree in the middle of the Eaton Centre….umm, you’d think they’d have their renovations finished by now

Anyway Plan B:  I did some on-line shopping.  It’s actually fun because you can do it in your pyjamas.  And!  You can support your local businesses and get cool, unique things on-line.  Check out this one here, called nothin which is Toronto-based, they sell t-shirts but they also have a great website.  December is shopping month, send me your ideas and I can share them on my blog!

Like Loading...
Posted by Kristin Peterson. Categories: Do This Not That, shop til you drop. Tags: Eaton Centre, nothin.ca, Pokemon, praying angel wall art on Shuter, Sawarovski Christmas tree. Leave a comment